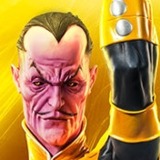 Lights Out was pretty good...but after that, it's seriously meh

I'm also not a fan of the show. I was really on board the Daredevil-hype train before this came out to the extent that I went out to buy some Daredevil trades. BUUUUUUUUUUT after 5 or so episodes, I thought it was pretty boring (TO ME, AS IN MY OPINION). The pacing was waaaaay too slow, and I can't get over how impossible it is for Murdoch to do half the $h!t he does without the ability to see. I get it's superhero-based and impossible things to happen, but I feel that they're trying to pass it off as something realistic when the core concept of Daredevil is just way too impossible. Furthermore, the vast majority of the episodes I watched were filmed with little to no light, so I wasn't able to see half of what was going on.

To make matters worse, the comics I bought were pretty bad as well.

I actually think that an HBO mini-series based on the entire story (including Tales of the Black Freighter) could be the perfect non-comic medium for Watchmen.

HBO confirms it has met with director Zack Snyder about a potential television based on "Watchmen," the influential 1986 DC Comics miniseries created by Alan Moore and Dave Gibbons.

"Preliminary discussions regarding 'Watchmen' have occurred," the cable network said in a statement to Deadline, "but we have no additional information and no deals are in place,”

The website suggests the discussion took place "months ago," and that there are no talks at the moment with Snyder, who's occupied with Warner Bros.' upcoming DC movie slate, including "Batman v Superman: Dawn of Justice" and "Justice League."

Snyder helmed the 2009 feature adaptation of "Watchmen," which received mixed reviews and grossed $185.3 million worldwide on a $130 million production budget.

After 6 film appearances as Wolverine, plus a cameo, I think it's alright if we don't see Wolverine for a while after Jackman eventually hangs up his claws.

Given that in 5-10 years, Marvel's CU will likely peter out, while DC's will only just be beginning, I think the answer is obvious.

@sinestro_gl:Yeah I agree, I dropped the title after Geoff Johns left. But still have some GL love in me though. More just Hal Jordan and his history TBH.

That's why I keep picking up the GL title, haha. But looking back on it, apart from the first arc (Lightsout) and a couple of brilliantly-written issues from Godhead, it wasn't really worth the $$$ I spent on the issues.

DC haven't had the best track record when it comes to promoting their work outside of comics. Even with their flagship characters, success hasn't been guaranteed, as Batman and Robin and all the Donnerverse Superman movies after the second one attest to.

What it shows is that DC are unwilling to take risks with characters that aren't as popular. However, part of the problem is that DC also doesn't devote the same resources to their other characters. You constantly see the top talent being put on one of the trinity books (recent example of Manapul and Booch moving from Flash to Detective Comics).