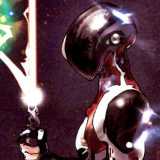 This is an irritating topic. Similar to Mace vs Palpatine, I just grow tired of refuting this and will do so here instead. Users frequently claim that Boba has held his own against or, in some cases, defeated Vader. The former is partially true in a certain context; the latter is simply inaccurate. This claim reminds me of the monotonous, false declarations that Batman has beaten Superman, despite the fact that this has never happened. Generally speaking, people who mention this have never read the stories that feature this match up but have instead given cursory views to out of context or ambiguously canon scans floating around. Let me say this: It is true that Boba and Vader have fought one another. Somehow, people ascertain that piece of information and champion it as one of Boba's chief accomplishments without crediting any mention to contextual detail or story canonicity. With that said, let's address the misconception.


There are two consistently listed fights between Boba and Vader, but only one is canon. The canon one, I will cover secondly. The first, the fight that is not definitively canon, is from Tales #11 in the short story Prey. In this story, Grand Moff Tarkin hires Boba to capture Han Solo, but Vader wants the involvement of Imperial forces to advertise a more intimidating message as opposed to deploying a bounty hunter. So while Boba is in pursuit of Han, Vader chases after him as well. Boba, Vader, and Han all meet in a cantina, and when Vader arrives, he intends to kill Han immediately. However, Boba wants the bounty for himself and instead challenges Vader while Han escapes. This is where the fight starts.

Now, let's cover the fight as it transpires. First, Boba fires his pistols at Vader a few times, with Vader subsequently repelling the shots with his lightsaber. When Vader downs Boba, he prepares to throw a downward strike only for his blade to be parried by a lightsaber that Boba ignites. Boba boasts about wielding a lightsaber, and then the two duel, if you can even call it that. All that happens for a couple pages is Vader swinging his lightsaber while Boba's remains seemingly stationary. He is never shown swinging it back at Vader to counterattack. He simply backs out of the cantina, achieving nothing, while Vader presses him back, and then Vader disarms Boba. This really is not much of a fight. How is it interpreted though? People claim Boba has dueled Vader and made the forgone conclusion that this supports the notion of him contending with Vader. Why? Boba literally did nothing here. Vader deflects his shots, he knocks Boba to the ground, Boba draws a lightsaber, Vader forces him back, Boba never hits Vader, and Vader disarms him. How is this even a duel? If this is a duel, this is a pathetically one-sided one. More than that, this story is from Tales, and it has never been brought into continuity. Therefore, even if this story did depict Boba engaging Vader on anything even remotely resembling equal terms (which it didn't), it lacks anything more than S-Canonicity anyway; so the fight has no bearing on anything.

Now for the canon fight. This is from Boba Fett: Enemy of the Empire #4. This fight has far more situational elements in it. First, let's discuss Vader's goal. Vader and other Imperial personnel fly to Vestar so they can gain hold of a chest that carries in it the severed head of a soothsayer, the queen of the Icarri Selestrine. Vader is aware of Selestrine's precognitive visions and has plans for its use in overthrowing the Emperor. Boba is in the Icarri town working on a bounty when he learns of Selestrine's powers also. To uphold the bounty, he resolves to keep the chest. When Vader comes into the area, he orders Fett to deliver it to him, which leads to a fight ensuing between the two.

Vader states at the very beginning that he is after the chest with Selestrine inside it. Boba is adamant about withholding it and shoots at Vader unsuccessfully (he probably meant this as more a distraction than a real attack; Boba is hardly ignorant of Vader's power) and flies away in attempt to retreat. He throws a grenade at Vader that projects a colossal amount of smoke to keep Vader misled while he heads for his speeder, but when Boba lands at the speeder, Vader is already there. So Vader cuts the speed in half. Since Boba is unwilling to release the chest, he begins shooting at Vader again, and, as before, nothing comes of it. Vader reflects his bolts, one of which strikes Boba. Now, this really is where the fight actually takes place. Initially, Boba is just fleeing, not fighting. Vader gives mild chase but is fairly overconfident in his chances against Boba. The instant Boba is out of options for escaping after Vader dismantles his speeder, that is the part where they actually begin to fight, and it proceeds poorly for Boba. Vader has him dropped in a matter of panels without even directly attacking Boba. Boba fires off multiple forms of projectiles to no effect while Vader evades and blocks the attacks, yet Vader still briefly downs Boba by redirecting one of his blaster bolts back toward him. Boba is not incapacitated to be sure, but the ease of Vader's dominance in this scene is telling, because, again, this is the real fight. However, when Boba is next to the cliff, Vader halts his advance out of concern for the chest Boba carries should it fall over the edge. While Boba is trying to regain his composure, Vader elects a "safer" tactic by manipulating his mind instead of barraging him physically. But when Boba falls over the edge in an apparently planned maneuver, he catches Vader off guard when the latter fears the condition of Selestrine. When Vader looks over the edge, Boba lands a blaster bolt on Vader's forehead. Following this, Boba proclaims himself the victor, but it takes little time for Vader to recover and decides to use Choke on Boba to subdue him (why he neglected this option in the first place is anyone's guess). To save himself, Boba kicks the chest off the cliff, which prompts Vader to release his hold on him and retrieve it. As a result, Boba escapes.

This is the battle between Vader and Boba that people consider so indicative of Boba's abilities? There are a mess of issues to recognize here. Boba had an item that Vader wanted which stopped Vader from finishing Boba in the middle of the fight and caused Vader to let Boba go at the end of the fight; Boba fled originally and only fought Vader when he had no other choice; Vader very casually handled Boba twice in this, once when Boba unleashes a variety of weaponry on him, all of which fails, and once when he just TK'd Boba; and the only singular blow that Boba ever manages to connect on Vader, out of all of the seemingly dozens of projectiles he launches, had to be a surprise shot just to tag Vader (a shot which ignores Vader's Force senses, but we'll let that go). Please, let me ask sincerely: How is this an impressive combat feat for Boba? All it did was show Vader's superiority without him having to even overwhelmingly beat Boba, and this was in Boba's own title. Let's be honest with ourselves: Boba lasted in this fight because he had a plot device. Really, let's just call it what it is. It was a plot device, a possession that Vader craved that obstructed him from utilizing the full measure of his abilities against Boba.

Now having said that, does that mean I see nothing impressive for Boba here? No. I find his adaptive tactics impressive enough. They were brief but still useful. I find his exploitation of Vader's attitude toward him and his mentality toward the chest to gain leverage impressive. Boba may have lost the chest, but he managed to use it to escape Vader. But this is all I can credit him for. Boba never beat Vader, not in a way that was meaningful at least. He knocked him to the ground with a surprise shot to the head, but Vader had Boba on the ground more than once without many people claiming Vader conclusively won. It would be a stretch to even say Boba held his own against Vader here. He fled, was caught, attacked, was dropped, landed a surprise attack, was dropped again, and was let go. If people want to elucidate on this event as a demonstration of Boba's strategic affinity, there is nothing wrong with that. But the problem is that this is usually mentioned as a combat feat to further an argument for Boba defeating an unrelated character in a battle thread in spite of the fact that this fight necessitated a myriad of circumstantial factors for Boba to survive. To disregard those circumstances is to be disingenuous. There is no other way to put it. That out of the way, am I saying that Vader would stomp Boba in every encounter with no substantial opposition whatsoever? Not necessarily. Vader knows and at some length even respects Boba; so odds are, he would restrain his peak power against him. And under that scenario, Boba could probably hold out for a period before losing. Could Vader well stomp Boba? I see no reason why not. He certainly has the raw power output to do so, but again, I doubt he would very often, or at least not unprovoked. Are there no situations, no matter how strenuous or complicated, under which Boba could beat Vader? I wouldn't take it that far. Given the proper setup, Boba could probably win, but the setup would have to be creative to be viable. But at the very least, there are situations wherein Boba could present a substantive danger to Vader.

In conclusion, yes, Boba has fought Vader. Is it impressive? Yes. Does it hold water in a battle thread against a character who is not Vader with setups that are not equivalent to this one? No.


Addendum: There is a page at the end of Enemy of the Empire #4 where the narration attempts to lend some minuscule level of credence to Boba's capacity to beat Vader. It mentions that while Vader was telekinetically pulling the chest up to himself after Boba kicked it off the cliff, Boba could have shot at Vader and killed him then. People repeatedly isolate this as a means of relegating the fight to Boba's favor. This is, for self-evident reasons, flawed. If Boba has to shoot Vader in the back while Vader is preoccupied with another task just to win, that should tell you something about Boba's chances, in the same vein that if Boba needs a collection of specific factors to balance the fight that should tell you something about his chances as well. Moreover, who is to say that would have killed Vader? Vader has survived blaster bolt wounds on several occasions, one of them being this same issue. If the comic intended it to mean that Vader would fall into the lava pit, that might be more plausible, but this then resorts to Boba winning by a BFR. And even then, what prevents Vader from levitating himself down or back up? What prevents Vader from sensing Boba's incoming shot through the Force and responding in kind? What prevents Vader from rendering himself immovable to ensure that he never falls over the cliff face? All of these are powers within Vader's arsenal. So if you feel the need to bring up that scan in the near future to "substantiate" anything about Boba's threat level, don't. It's a fairly desperate point to make.
8 Comments
Load Comments