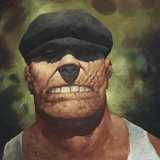 I like Hawkeye, I like Renner, and I hope they keep him around. I certainly hope they don't kill anybody, thats one thing I've always hated about comics. Why kill off characters? I read comics FOR the characters, to see them in action, interact, and to follow their stories as they unfold.

Having said that, if someone dies in AoU my money is on some less central characters, such as War Machine, Pepper Pots, or even a bunch of random civilians, (which would make sense considering that was really the catalyst for the super human registration act in the comics)

Think about that. Ultron wants to wipe out humanity, who says one of our beloved heroes will die and not a bunch of innocent civilians. That is guilt enough for Stark to spearhead the registration as well as cause further rift between him and Cap.

If anything happens to our heroes I dont think it will necessarily be death. There is the rumor of Hulk/Banner being blasted into space. There is the possibility of something happening to Thor as well, considering the title of his third film, Ragnarok (which I sincerely hope deals with Thanos or his minions attacking Asgard to get their hands on Infinity Stones).

Futher more, I dont think Quicksilver will bite it either. Just because he is not seen in the BRIEF final battle shot we saw in the trailer doesnt mean he isnt there. He has super speed, he could be running around somewhere so fast we cant see him, or perhaps he is on some other side mission that requires his speed. It looks to me like they are defending something in the middle there, perhaps trying to make time for Quicksilver to accomplish whatever his mission is.

All I know is I want a scene of Cap, Hawkeys, Quicksilver, and Scarlet With in action together in this movie, an homage to "Caps quirky quartet" from the comics.

Why are ppl shouting Dc Bias here?? Really What is Ronan suppose to do against an Earth Lantern?? I have yet to see ppl support Ronan in an intelligent manner citing feats and capabilities of his weapon.

This match is almost a mismatch John can drop Ronan with so many different constructs and simple Will power shot, While Ronan who can't fly is gonna have an up hill battle and best bet is to land a physical strike against John who'll bounce back of course and turn up the heat on Ronan.

All Universal Weapons have a failsafe. A Universal Weapon can only be used by a Kree public accuser that is clad in his cybernetic armor, all unauthorized users will be shocked.

His weapon can have an advantage on the ring's powers as it can absorb energy and it's durability would be a factor when the ring needs a refuel.

Also Ronan for me it's more expierenced in the arts of war.

@tyger: I was unaware of this, but it certainly adds more credibility to my argument

@fallingcliffs: I don't see magic having an effect on Mags powers, he has been known to use his power on Thors hammer to great effect, but i will conclude that there isn't enough known about the compositions of the ring to justify a win for Eric. It was simply an angle I noticed had not been covered and was worth considering and made for a good discussion.

@fallingcliffs: Well said. But I maintain that even if some of the components of the ring are susceptible to magnetism then Magneto would surely be aware of this and would easily dismantle his ring. I admit I am unsure if the ring would still work if it did not have all of it's components, but it is certainly something to consider. Magneto would be aware of the Lanterns ring and it's power during the brawl; all he would need is a split second of dropped defense and the metal components in the ring would be dismantled and possibly the entire ring itself removed from the Lanterns possession.

My original post states that there is strong evidence that the rings are made of metallic components, and with listed issues to back it all up, as well as the fact that at least five rings are known to be composed from ore from titan..

The power rings were developed by Oan technicians and then psionically "carved" from the Central Power Battery. The actual composition of the power ring remains a mystery. There is evidence suggesting it is made of an alien metal or crystal, the origin of the construction material can be debated. [Secret Origins #23, Green Lantern Vol. 2 #223]

Power rings are said to be made of "Oaite," a compound found on Oa. Other compounds have been taken from worlds throughout the cosmos, at least five power rings were comprised of ore mined on Titan, a moon of Jupiter. [Flash Vol. 1 #221]

So did anyone think that Mags would simply take the ring from GL using his own magnetic powers?? I mean there is a pretty strong chance that the rings themselves are crafted from various metallic substances.... Seems to me that is something to certainly consider.. No ring? No Green Lantern..No problem for Magneto..