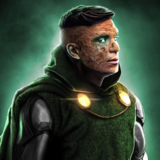 @thor_ul: You're welcome. Plus, some more Spider-People:

Not sure if you have those latter two or not, but just to be safe.

How about Rowan Kent? She's a biological member of Superman's family in her timeline and has the "S" shield on her costume. I see her as a kind of "Blue Lantern Superwoman". I feel she should count. :)

Marvel's introduced some new ones:

Spider-Man Noir (who now has his own separate character page)

We never did finish our discussion on my list, and since I've updated it since you commented, I'd be interested to see your thoughts now.

@reaperace: Well that does clarify things a bit. Thank you.

Some of the responses on my Ben Vs. Team Windu fight though would seem to indicate "OT characters are WEAK!" notions are still alive and well (unfortunately).

Regarding the idea that ANH Obi-Wan is comparable to Sidious, I've gotten some serious (and well argued) pushback for suggesting it. I'd be curious to see how you'd respond.

2) I don't think BW and Love and Thunder ruined any origin stories. Gorr's origin isn't 100% identical to his comic version, but I don't really think it's inferior. His origin scene is one of the best parts of the movie.

3) Hawkeye, Ms. Marvel, and Falcon and Winter Soldier are all pretty good. I don't think any one of them is definitively better or worse than the others.

4) So many people hate on Multiverse of Madness, and I really can't understand why. What "visible flaws"? I also don't think his directing was cheesy. Even if I did, I'd just say that a blend of horror and camp is his style. That's the point. People love to parrot Scorcese's MCU criticisms. Well, Multiverse of Madness has the director's creative fingerprints all over it...and people still complained. Seems rather unreasonable to me. I think Multiverse of Madness lived up to its potential overall. Trippy, has alternate reality fan-service, has one of the MCU's best villains, and (again) has Sam Raimi's distinct style (IE: the very thing MCU haters claim to want more of).

I had debated putting Love and Thunder higher than Ms. Marvel. It definitely has a way better villain, but I think Ms. Marvel does an overall better job with its story. Thor: Love and Thunder's storytelling is rather messy, as many people online will happily tell you.

I personally think Cate's a little too old to play Alarielle at this point, and I also don't think she's quite the right fit either way.

Rachel Zegler plays Maria in West Side Story and will be playing Snow White in Disney's LA remake of that movie. Given that Naestra is basically a Disney Princess in the wrong universe, I figured it would fit.

@cergic: Yeah, I thought so. He’s good at playing dark and ruthless characters as well as misanthropic ones

I mean seriously, listening to him I think he kind of sounds like Tom Hiddleston.