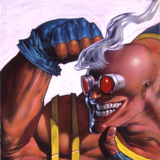 In war it's not who is right, but only who is left 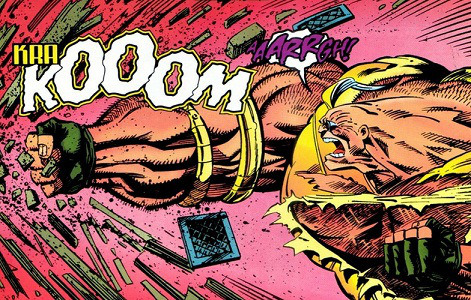 Go Beyond Your Limits!

Grodd possesses super strength. He can military press about 100 tons with ease. However when an object in motion comes in contact with him his mutant power activates and absorbs the kinetic energy which results in him becoming stronger for a short time. The energy he absorbs will enlarge his muscles depending on how much he has taken in. Grodd must release this energy inside him by using his strength at his full potential. Grodd can only store the kinetic energy for about 90 seconds (one and a half minutes) before his body takes damage by his muscles getting punctured by the energy inside of him. This process is extremely painful which can exhaust his critical heart condition.

The mutant ability to absorb energy brings him a major advantage as it releases stronger than it was before. The more he absorbs will determine how much stronger it will become. Small levels will be doubled, Medium will be Quadrupedal, High levels of energy will be released tenfold and further on.

With the amount of kinetic energy he can absorb from an active battlefield he can release it all in one shot most likely vaporizing the molecules through his one blow. Thus giving him the name of Shot because he can potentially defeat anything in one shot. (Superman level strength at his upper most limit)

Grodd also has super durability also. His durability becomes greater when his muscle tissue increases when he has more energy inside of him.(Base durability; bullets - missiles are like rain drops to him) The greater his muscles become the more Shock absorbent his entire body becomes thus nullifying most damage becoming high invincible to physical harm at his full potential. An example of his durability is Vibranium. Absorbing vibrations into his body which nullifies the attack.

Grodd is nearsighted and wears corrective glasses. Without his glasses he becomes a lot less effective in combat but they tend to stay on his face out of luck. Grodd also has a severe heart condition that does not allow him to put too much strain on his body or else he will suffer a heart attack.

His body also gradually grows energy inside of his body at a steady pace, if he does not release it within time. It will release itself through his flesh.

Through Shots quiddity, he'd never allow evil to overcome justice. People seeking Godhood had attacked his heart. A cosmic force would perish his limbs. Giving it his all even if it were to eventually come to him, to lead him to a hospital room or even death, he fought for whats good and it was worth it.

The price he had to pay for the crimes of others made left the indestructible man crippled and even more vulnerable than ever. Still able to walk, but barely. The bones and muscles in his legs and arms are no longer in their prime, injured beyond repair. Grodd would seek elsewhere beyond his tactic of strength and look towards those who used their brain over brawn, which Grodd barely ever done.

Over just a few months, his athletic mind grew tired of his crippled body. Barely able to travel places without his wheelchair. There was no treatment, his muscles were beyond repairing. Looking at other heroes who used suits to increase their strengths would bring him the solution to bring him back into the game. Thus making an indestructible man, a suit of armor.

The exoskeleton would replace the wheelchair, allowing him to walk and move better with the suit as if he were his normal self.

However, unlike Shots body, the suit isn't as durable as himself. Made out of thick plates of carbon fiber, not to protect himself, but to protect the interior design that gives him the ability to walk. Without the exoskeleton to help him move he becomes a cripple again.

Even though Shot has years of experience on the field, this major upgrade allows him further to control his powers. Reapplying Shots old power gauge that limited the absorption of his abilities into the suit of armor and new weapon.

The suit of armors design by default sets the power gauge to a minimal absorption rate of 25 tons. Allowing Shot to absorb small amounts of energy.

The hammer acts as a channeling system using Shots ability to release the energy tenfold through the Hammers blunted end in a more concentrated and safer form rather than releasing it through the raw power of his body. Before without the suit, Shots energy would have an unlimited radius in potential causing major destruction. Now with the hammer it just shoots out all of that harnessed energy into a small one directional sonic blast.

Though the power gauge is set at 25 tons. It can be broken if Shot is hit with overwhelming power, ignoring the limit, giving him lethal amounts of energy making him a ticking time bomb.