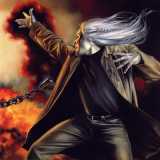 What I would like to say about Spider Man 3:

Do you realize you just took Doug Funny and Eric Form and covered them in Tar?

Coming back from the Dead!!!!

Spider-Man probley has it stuck on a web on some building some where .  We would have noticed a bulge on the side of his hips by now.

He hides in one guy's mind the entire time.  When he falls asleep he comes out.  Very different.

IN the Midnight Sons Siege of Darkness.  They all ended up with matching Tattoos on their forearms.  Tattoos can be used as showing who is in a group.

In ghost rider 7.  Blackout cloths the hospital in darkness and the one shot where he is seconds away from killing Ghost Rider's sister Barbara Ketch.  Creepy Image.  That and the scene in the first chapter of Maximum Carnage when the red vain-like tentical pops out of his wrist.  That was the first time I saw Carnage in comics.

Not bad not bad.  great characters.  But the new Midnight Sons Line up coming up in the new Marvel Zombies 4 could cause some serious damage.

Hell in his mansion, and magic, just imagine

Babes all over the place.
Demons getting drunk.
Ghost Rider gets shit faced.
Morbius and Blade in a drunken brawl
Moon Knight making out with x-23
Man-Thing Vomiting all over the place
Hellstorm and Spider-Man doing body shots off of Mary-Jane.
Beer pong with Nightcrawler and Werewolf by Night against Deadpool and Gambit
Kareoke with Venom singing Angel Aquarius blasted
Start the Conversation

Blogs Created:
19 blogs
Most Commented blog:
What I would like to say about....
Total Comments on blogs:
10 comments