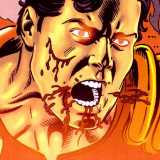 First off, I'd like to say that RPGing here was a blast, well not at first but towards the end it was. However, this facade has to end, everything you people think you know about me, including those whom I have talked to on MSN, is a lie. A big, fat and very ugly lie and once I get it off my chest I will feel even better than I have in the past few days. Okay, onto the truth. Let me tell you all the story of a young boy named Vincent Monroe. Monroe was born with several genetic defects that were all wrapped up in one nice tidy package called MDD.

Because of his condition, Vincent would sometimes become so drawn to something that was usually fictional in nature that it would overwhelm his senses. His over-active imagination would take control and poor Vincent would be imprisoned in a fantasy world of his own making for extended periods of time all the while allowing a second personality of sorts to take control.

In later years, after nearly a decade or so of psychological therapy and with the aid of some helpful medications, Vincent thought he had overcome most of the problems associated with MDD and then a chain of incredibly powerful unexplained seizures destroyed Vincent's mind and restructured it. The deaths of three separate family members on three separate Christmas' didn't help much either.

So...Vincent snapped and he became so enraptured with ComicVine that he lost himself in worlds that never even existed in the first place. His sense of what was right and what was wrong became so distorted that during his time as King Hyperion, Vincent decided to create a little brother who went by the alias of Shadowstep and once he had fooled everyone into thinking Shadowstep was a seperate entity altogether he faked his death.

Of course...Vincent's mental health was in such decline that he came to believe that he once had a big brother and that all of the lies he gave out about his "true self" were real. Vincent died on the inside, his soul fell prey to corruption and his mind became the perfect host for madness. Vincent spent months manipulating the minds of others via the use of the Shadowstep persona and thus he was able to achieve things that in reality were more trivial than one could imagine. Of course at the time Vincent believed these things to be the most important things in all the world.

Believe it or not, Vincent's insanity was actually able to keep on growing and growing and growing until finally it had become a voracious metaphysical cancer that sought to consume more than just Vincent. It desired to take the sanity of others and so Vincent submitted to the will of his own $%^#ed up mind that he turned his focus on slowly but surely driving everyone around him insane. But then sometime last week, the veteran viner known as The Hunter did something that up until then no one else had been able to do: he undid eighteen months of corrupted mental reconditioning and freed Vincent Monroe, he freed me.

After all this time...I'm finally back to normal and I plan to keep it that way until the day I die...no matter what it takes in order to do so...which includes shutting myself off from this site of my own accord permanently. I just had to get this all off my chest first and now that I have I feel so much better than I already have been feeling the past few days.

Archives of Azura are a series of Blogs I will be doing which feature mini-bios of characters, groups, places, etc. that are seen throughout my main profile. For the first installment we will be taking a look at Shadowstep's principal antagonists.

The Director is an alternate reality version of Shadowstep from Earth-529. Unlike his Earth-616 counterpart, this version of Cifer is a corrupt, power-hungry madman who reigns supreme as one of The Directors of CORE.

The actual extent of his influence within The CORE's hierarchy is not known, however it is widely believed by The Mutants that The Director has taken complete control of The CORE.

While there is currently no hard evidence to prove whether or not this is true, it is clearly evident that The Director is allowed more freedom to do whatever he wishes than anyone else affiliated with The CORE.

Historical details on this character are currently classified.

The King of Worms

The King of Worms, as he is known, is an undead Necromancer Lord who leads The Cult of The Blackest Dawn and is a Master of The Black Arts.

When the world first learned of his existence, The King of Worms came under attack from the legendary Vampire Hunter known as Abraham Van Helsing.

Van Helsing had assumed that he was a Vampire only to discover during that The King of Worms was actually something far worse.

He was once a Necromancer who had turned himself into a Cultsworn Litch, a monstrous undead creature whose kind primarily fed off of Lycans, Vampires and other supernatural entities in order to increase their power and might.

The Cultsworn Litches were also known for using their mystical might to turn the husks of their prey into Worm Thralls, abominable Zombie-like creatures who are forced to "live" a tortured existence serving their Master until he has no use for them anymore or until they have been destroyed.

The King of Worms resurfaces after centuries of hiding following Shadowstep's arrival on Earth in the Twenty-First Century.

If anything, Mary Princess Kinomoto a.k.a. Charmix is only an adversary of Shadowstep's purely by circumstance.

When she halted a catastrophic incident that had accidentally been created by her own probability manipulating powers, she unknowingly caused the destabilization of countless other timelines.

One of the timelines affected by this "Reality Destabilization Wave" was that belonging to an alternate reality version of Shadowstep.

When it was learned that Charmix was responsible for a number of gargantuan solar system-annihilating fissures tearing the fabric of time and space apart Shadowstep was sent into the past to apprehend her.

A fight erupted between the two but ended in disaster for Shadowstep after he learned his body was incapable of handling the large portion of Charmix's probability manipulating power he had absorbed.

Shadowstep's rapidly dying body turned to dust before Charmix's eyes that day, sealing his ultimate fate, or at least that is how it seemed at the time.

While Charmix is not yet aware of it, thanks to the words she spoke in the wake of Shadowstep's death, "I hope we meet again someday," reversed all of the damage her powers had caused in other realities.

However, even though Charmix has unknowingly put everything that once went wrong together again, the reconstruction of these timelines was not entirely accurate.

This has resulted in many alterations to the history of Shadowstep's future timeline as well as the way his life turned out, nevertheless the alternate Shadowstep is still aware of his interactions with Charmix.

Whether they will actually meet again one day is uncertain and if they do...will it be under friendly or hostile circumstances? Only time will tell...

Kaligar Roxom a.k.a. Warsman is the last son of Symaar, a planet that was annihilated countless ages ago by The Anti-Monitor, or at least that is how the story goes.

Ever since the day he crash-landed on Earth, Warsman has crafted for himself a grand legacy mired in blood, death and destruction that will never be forgotten.

DISCLAIMER: I own nothing.
Start the Conversation

Okay, so I've been hearing a lot of talk about many Viners being interested in my true identity. Many believe me to be the same person as King Hyperion. I am going to tell you all now that I am not King Hyperion. While he was the creator of this account, he abandoned it after a fellow Viner helped him realize that he had Cobalt Syndrome, and that he had only made this account because of it.

The reason that the Shadowstep account is no longer under the control of the man known as King Hyperion is because after he decided to give up on actual RPing altogether and go back to his one true passion, which is Wiki Editing, he asked me (I know him personally, he's my Brother) if I wanted one of the accounts he either was no longer using or had no use for whatsoever.

So I made my decision, took control of Shadowstep, changed the password and became the sole owner of this account. So even though a few earlier posts of "mine" directly refer me to being the man known as King Hyperion I assure you all that I am not him and that you can disregard them as having been during a time when Hyperion was still the owner of the account.

As for my true identity...if I decide I want to reveal that to you all then I will but until then I have "No Comment" concerning that particular subject. Nevertheless I hope this clears up any confusion and will finally distinguish me as being a completely separate person. I also needed to put this down because I can't allow the possibility of people thinking I am violating Rule #4 on The Vine's "Your Use of the Site" section in Terms & Conditions come into being.

Also, though I do not believe I am doing or have done anything wrong by taking control of the Shadowstep account since it was given to me by my Brother (who better reply to this blog post if he ever gets back online today so he can also provide further confirmation or else I'll hide all of his Green Lantern Comics in my secret stash and drive him over the edge while he tries to find them!), if it is wrong that I have done so then I will gladly face the consequences.