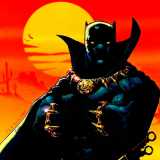 Starting at the age of 14, T'Challa began to train with brilliant minds on the planet to learn about Science, Biology, Criminology, and other areas that would help him. T'Challa is also a master of stealth, disguise and escapology. He has infiltrated high security strongholds and systems. He's also fluent in many different languages English, Spanish, French, Russian, German, Japanese, Chinese, and other languages.

T'Challa, wearing a mask, challenged the then Black Panther & King (his uncle S'yan) and beat him in fair combat. After that T'Challa was re quired to take the rest of the Black Panther trials such as defeating the various champions of the 18 Wakandan tribes, being judge & found worthy by the Panther God / Bast. Next the Heart Shaped Herb/Heart of Wakanda was applied to his body and ingested by him (the process would kill any person who was unworthy or not a member of the royal line) and that process also link him to Bast. The competition of Panther trials made him a superhuman granting him has enhanced speed, agility, strength, endurance, healing, memory and senses (sight / vision, hearing, smell, etc).

Along with the title of Black Panther T'Challa received a habit woven with Vibranium, a metal with the ability to absorb all vibrations and kinetic energy it comes in contact with. Vibranium is only found in Wakanda, hence the nation's need for protection. The costume negates most force directed against it and robs moving objects of kinetic energy. This keeps him protected from most attacks. At times, Panther wears a cape that is used to help conceal him in the shadows, and it has also been used as a sort of parachute/glider. Blades can cut the fabric but only if they cut along the grain.

Grappling Hook: Panther can use this to grapple onto high locations or can grab hold of a enemy by directing it at him. Tracers: Signal tracers that can adhere to most if not all surfaces. Sonic Grenades: These disrupt electronics and disorient enemy hearing. Flash Grenades: This gadget is used to temporarily blind enemies. Tasers: Panther carries this to shock or neutralize an enemy. He carries dual pistols and an Adamantium Knife.

The Kimoyo card is a extremely powerful portable supercomputer invented by T'Challa that has the ability to access technological interfaces and can hack into any other technological devices. T'Challa also has anti-metal claws that can cut through nearly anything, including the hardest metals. He also uses a vibro-dagger which is an energy dagger that he can use to cut through almost anything.

Thanks to the Heart Shaped Herb , T'Challa has enhanced speed, agility, strength, endurance, healing and senses. All of these attributes have been raised to near superhuman levels. With his enhanced senses the Shadow Panther can see in complete and total darkness as if it was bright as day, and can see something 100 feet as if it were right in front of him. With his sense of smell he can track someone across a continent with his sense of smell, memorize tens of thousands of smells and can detect fear/lies in a person. He can hear things that normal humans can't as well as sounds that they can, but at a distance not possible with normal ears. He can hear the breathing and heartbeats of enemies. With his sense of taste he can determine any ingredients in anything he eats. He can use his senses together to sometimes predict his opponent's moves ahead of time. Because of his training, T'Challa has also mastered all weapons known to man, and even guns. T'Challa's combat skills surpass any superhuman and normal man, that he even knows every pressure point and nerve strike. Which he inflicts dangerous pain to his enemies which can cause dizziness, numbness, unconsciousness, temporary paralyze, disorientation, and even death.