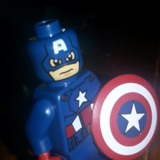 This is definitely my book for those classic "Avengers Assemble" moments in nice, arc sized stories. I don't know when it happened, but I'm starting to really like Luke Cage and Ewing has a good handle on him as the heart of the team opposite Monica as the strategist and field leader.

I also love Superman pastiches and Blue Marvel seems to channel a vaguely Morrison-y, All-star, super-scientist Superman; very appropriate for the Marvel U I'd say.

Like many, I had sworn off the Land, but an interesting enough start and a strong voice have won me over so far. Marvel now has me for a fourth Avengers title...

I've enjoyed it. I've been reading both Avengers and New Avengers along with a friend and we've enjoyed researching all the obscure threads Hickman has begun sewing into his Avengers story. It's definitely a slow build, but some of the issues are still really enjoyable (the Spencer collaborations stand out to me) and I at least keep telling myself, its Hickman; I was completely prepared for a couple year build on this story, as JH intimated before he started.

The addition of the Avengers World title might advance the storyline a bit faster for a while; some might be bothered by that but I've enjoyed what Nick Spencer has contributed to the Avengers so far so I'll probably be staying on.

Many might disagree but these books are still on my pull list for a specific type of Avengers moments, some of which I would say have started to pay off in Infinity, long awaited though they may be.

When I was laid up long term with a chronic illness, it was the launch of the New 52 that renewed an interest in comic books and gave me something to look forward to every week that I desperately needed.

However, it wasn't until the Marvel NOW launch that I started collecting comics for the first time in a lifetime of downloading and reading library trades.

So I won't piss on either initiative, they gave me comics to read and in fact, did the exact thing the comic bigwigs dream of; make a paying customer of a pirate.

But to answer the actual question weakly posed by the title; I miss the more lengthy Batman timeline. There's no way they could reboot the whole Batuniverse, too many characters to start over, and I really like a lot of what Snyder has added to that Bat mythos as a whole, but I feel like they tried to have too much carry over and still have the energy of a reboot. Its getting better, and they get to tell these formative stories anew, but the 5 year cram of Robins is an especially glaring oddity to me.

Marvel? I miss the pre-schism X-men. I like some of the themes and teams of the Mavel Now X-men, but I guess they're just going through their phase of "hero vs. hero" only instead of being a conflict of ideology and a commentary of modern politics, its a tangled web of hurt feelings, past injuries and crimes of passion. Unsurprising really, the X-men have long been a drama-laden series, I guess I'm just counting the issues till the X-teams start to draw back together again.

I didn't really like Fear Itself very much when it happened, Fraction's Thor is about the only honest instance of "Not muh favorite character" syndrome I've had and I think it affected my reading of the event. Perhaps its time for a second run through, I did enjoy Thor fighting the two Worthy (Thing and Juggernaut?) and Spider-man's part in it pulled all the appropriate heartstrings.