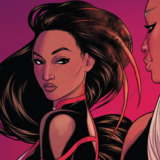 Jean Grey is more iconic than she is interesting.

Cable is inherently too messy of a character and has only been interesting in 5% of the comics he's appeared in. The good does not outweigh the bad.

Laura was at her worst in the 'New X-Men' series and has benefitted from her distancing herself from that generation.

Having potential <> being a good character

People only like Magma for her powers. She is the worst, but she will never make those asinine 'worst X-Men lists' because she is molten lava with breasts.

Apocalypse was a crap character until the 'Arrako' stuff came out.

Rogue should be an Avenger full-time.

The only pre-Claremont X-Men I would keep on the roster are Storm, Cyclops, Wolverine, Nightcrawler, Kate, and Magneto. The rest should be retired / fulfill other roles. The aforementioned six should all age, evolve, and foster the growth of other characters.

Multiple Man is incredibly annoying and kind of a perv.

@adamtrmm: oh I agree. Im not a fan of the sidekick idea either by any stretch but if it must be done theres no need to create new characters here use what you already have

The real tea is...even if they're not legacy characters in the traditional sense, a large majority of the Academy X students aren't huge deviations from existing characters in terms of personality or powers.

Also, fans have been complaining about 'why not use the existing characters instead of create new ones' since the O5 and lawd am I glad we didn't stop at Archangel or Mimic for peak freshness lmao

#3  Edited By Selina_Sublime
7 months ago

Worst X-Men Era: Utopia. I don't know if there was a single good book at this time. Really dull premise, bland writing, and the books had so many cameos but for the first time didn't feel like a true ensemble.

Does having a book get published really affect your life that much?

Season 1 is probably investigating the death of Jumbo Carnation.

I would take inspiration from a Gen X storyline and have the kids try to integrate into a largely 'all-human' school. Play into how different characters will integrate better than others and how that ends up affecting the group.

@hawk2916: No, my grandfather Winston Churchill taught me to read comics back when there was no social commentary whatsoever!

@cattlebattle: exactly. I say read comics for entertainment. But for social commentary and historical issues read a book or encyclopedia

Are you new to comics?

I would've loved to see:

X-Factor is exciting in theory but I've not really liked anything Leah Williams has done so far.

I agree the female students far outweigh the men in quality.

I do like Prodigy, Rockslide, Beak, and Anole but the rest...nah.

I could leave everyone from Eye Boy to Hellion to Match in the garbage.