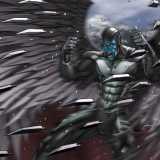 Haha, nice I had to scoop it up. I have not played part 1 since high school. I played 2 & 3 on the ps3 a bunch but was sad I could not have a shep transfer from part one until now lol.

Hey guys just got this today and I did an unboxing vid. Check it out if your curious as to how it looks and what comes with it. Feel free to ask me any questions =) If the link does not work my youtube name is seanakamisery

If Naruto and Sasugay are current they could probably win.

#5  Edited By SeanAKAMisery
@MasterJohn: Everything has been done buzz killington!! LOL XD
10 years ago

Go through round 1-4 easily

Titus and Chief will steamroll the elites

Doomguy will wreck Spiders and Daemons

Any of them would solo the Tyrants, These are the same Tyrants get beaten by humans.

Chief and Titus destroy MGS. Almost everyone of them can be one shotted. Even Raiden and Vamp don't have the physical stats to compete with Chief and Titus not to mention they're too damn durable.. Otacon, Naomi, The Rat Pack, Drebin, Cambell, and Big Mama aren't going to help in a direct fight. The only one's that may be someone of a challenge are the BB Corps. Screaming Mantis will be worthless since none of team 1 have nanomachines. Only Crying Wolf and Raging Raven may require effort, they would only have to get in close to Wolf to kill her, and Raging Raven would need to be grounded which the Doomguy could do with the chain gun.

@YourNeighborhoodComicGeek: They'd steamroll the first 4 rounds but they'd stop at 5 because they have no way of putting Mercer down. Dude is a monster

Fanboy much??? Radien throws Gekos around with his legs. He held Outer Heaven back to save snake. It must have weighed over 100 tons so ya. His fighting and sword play would tear MC apart. Put your fanboyism aside and look at the facts. The team does not get past MGS level, way too many different variables.
10 years ago

#7  Edited By SeanAKAMisery
@DarkScarecrow: Why do you hate Catwomen, to put her in an fight she can't win?? LOL
10 years ago

Last I checked Thing is in the 100 ton range and Grundy is not. Thing wins and Grundy don't get pants lol.

Ozy can Solo this no problem.