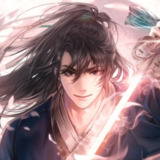 Zhou Yu stood atop a building overlooking the city. It was a shame as the Grail was lost and he could already feel his life would not last long in this world without a master to be bound to. He knew he could possibly find ways to conserve and regenerate mana given time but alas he no longer felt that was needed. His time was up and there was only one thing to do and that was was leave. Still the burial agency's leader rubbed him the wrong way. He did not believe he could beat her as things stood with such limited mana however still perhaps he should give her a little going away present. So He closed his eyes and when he opened them upon his head was a crown made of energy and a strange symbol.

he thrust out his hands and a ball of energy began forming. This ball of pure life energy was not enough yet he was going to put everything into his attack. He began channeling the absolute ice element into the ball followed by fire and wind.

Still this wasn't enough the contradictory elements fought to go out of control yet he kept them from exploding on him. He began channeling the power of spirit and space-time into it so now the attack would be able to suppress the source of his opponent's power. Lastly a red energy sprouted out from his body and mixed with the attack as a blue flame sprouted forth and began circling the attack.

This should be enough. Anymore and he would dissipate and vanish before he even got the attack off.

Instantly he teleported to where the leader of the Burial Agency was invisible to any precognition. "Command Seal: Take this attack without any protection!" he shouted as he used his divinity to sap any magical resistance that would impede his command.

The attack launched itself point blank the conflicting elements exploded and the Space-Time energy completely shut off the source of power as the red energy sucked her dry of lifeforce. Finally the ice element would seep into her causing her to freeze from the inside and will cause those hit to explode from the inside based on their power.

As Zhou Yu launched the attack he smiled as he faded unable to see what would happen next.

@naronu: Zhou immedietly noticed the problem with his body as soon as he returned to his territory and began to use the Shenling Zhi Jin to provide an abundance of life energy into his body to rapidly heal the decay as he used Spatial control to seal the space around him to cut off the source of decay from himself and used his spiritual power to force the decay energy out of himself as his body healed fron the decay.

A Golden Spiritual Eye appeared on Zhou Yu's forehead as soon as he entered the area. The eye of Destiny alerting him to the danger that was this battle. Deciding this would be a risk to his life he conjured up a Spectral Gate and walked through reappearing back at his Territory using the connection he has to the Territory and being able to sense those inside his territory to accurately find his way outside of Rome and back to his base.

@naronu: Zhou Yu teleported into a building a bit away and sat down in a meditative position and released his spirit eyes and looked at the whole map focusing on finding different points of interest and individuals of note.

Zhou Yu threw on his cloak and sourced Nanomachines(Nanomachines) then took off into the sky and watched the rain form into the barrier at the church. "Interesting," he whispered as he illusioned himself invisible then flew closer to get a closer look at the area.

Zhou Yu smiled softly at the two mental messages rang into his head. "I should track those two down though not yet. First I should settle down and prepare for the coming war," he mused and stepped off the road letting traffic continue. He was about to set up his territory when he noticed the portal open up near him and he noticed from the information in his head was a ally(@darkdementor101. He stepped through the portal himself.

Stepping through the portal Zhou Yu noticed the abject squalor the civilians were living in. His smile quickly turned into a frown before he decided to act. "This will be a fine place to begin preparations" he stated and stepped out of the tent and looked around again.

"Rise my Territory,"Zhou Yu declared as the area around him due to his Territory EX started to change. The once depressing refugee camp started to change becoming a large castle where each family had their own spacious apartment to stay at inside. Also in the castle he created chambers for all Servants of Red, a training room, a meeting room, a lab for those more technologically inclined. Finally on the outside he created a bomb shelter and exercise fields for the refugees.

He then turned towards the gathered allies and spoke, "Let the war commence"

I vote everyone dies

@bob74h: according to people I've spoken to it's due to the lack of rules

@bob74h: don't say I didn't try to warn you. CV loves to get broken with abilities.

@bob74h: you can limit time manipulation to just slowing and speeding up but rapid aging and time stop are too broken