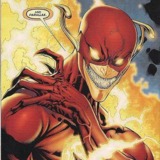 CAS the most powerfull being ????

I have been doing some research and I have cone to the conclusion that;

COSMIC ARMOUR SUPERMAN IS THE MOST POWERDUL FICTIONAL CHARACTER EVER

Here is a quick rundown of his feats

He can actually feel the narrative progressing around him. http://i.imgur.com/D4aSGgd.png

Can hear the reader's breathing. Can feel the reader grabbing the pages of the comic. Note that the original comic was in 3D, so he's actually trying to touch the reader. http://i.imgur.com/NoVaykz.png

Due to his nature as being on a higher plane than the rest of the multiverse, he can perceive Limbo from the outside. http://i.imgur.com/U95M5Gx.png

Can hear a single heartbeat of Lois Lane, universes away. http://i.imgur.com/nrBcnr0.jpg

Can perceive the true nature of the Monitors. http://i.imgur.com/R8iXrLV.png

Can hear Mandrakk screaming even as he no longer exists to scream. http://i.imgur.com/Kf1fCMv.png

Strikes Mandrakk with enough force to create a light visible from miles away, and crumble the very universe upon which they walk. http://i.imgur.com/ix9oMyn.jpg

Thought Robot Superman's greatest ability, however, is the fact that he embodies the Superman archetype itself. He's literally as strong as he needs to be, because he's Superman, and he has to save the day. http://i.imgur.com/myZCk4L.png

Now before you have your jimmies rustled and attack me, please give me an opportunity to explain why by addressing some likely questions;

1 No Way, No One Is More Powerful Than Presence, OAA, Beyonder etc.

To begin with, there can be only one omini in any universe or multiverse or megaverse. There cant be 2 characters who claim to be all and end all in any universe.http://images4.wikia.nocookie.net/__cb20111125164531/spore/images/b/b6/Omniverse-MushrumKing.png

If that were to happen, they would just merge into 1 being. Its as simple as that. But how is it possible to go past the "omini" stage. The answer is; you don't. CAS went into the world of the Monitors, seeing them as nothing more than mere mortals http://i.imgur.com/R8iXrLV.png.

Now these beigns are multiversal beigns who rival beyonders.http://www.zonanegativa.com/imagen/4531.jpg

To break it down, if your cell was a sentient jpg

anism, it would view your body as it's universe and will never be able to comprehend how vast it is. But suppose let's say magic, transformed it into a human, it would view you as its equal, if not far superior. That's what happened to CAS. After merging with Ultraman, Captain Adam, Overman, Superman and Captain Marvel, it viewed these begins as nothing more than helpless civilians. To top it all off, he was thier Superman providing them hope, when all was lost. Feats aside, that speaks a lot about his power level http://i.imgur.com/U95M5Gx.png

2 Nah, Bro U Realise Those Monitors Were No Where Near As Powerful As Primordial Monitor

Primordial Monitor was KIA during COIE, and the supposed reshaping of the Multiverse created the Monitor race each guarding 52 universe. http://vignette3.wikia.nocookie.net/marvel_dc/images/3/34/BNW_Monitors.jpg/revision/latest?cb=20080425014337

So how do we know that CAS was above him in terms of power? Well for we all know very well that Overvoid=Source=Presence. And luckily for us, the final crisis arc mentions the Overvoid, which is well an abyss. I have a theory that this abyss may be the remains of the Primordial Monitor.

http://static.comicvine.com/uploads/original/11124/111243216/4761492-2vhdulf.jpg Overvoid is the mind of the monitors aka all of them combined into 1. But we have already seen what Dax Novu did. He didn't even exist and drew his power from the Bleed. Now the monitors can't actually see into the bleed. Their mind cannot perceive events happening there, and Mandrakk overpowered them as a whole. https://en.m.wikipedia.org/wiki/Monitors_(comics) In other words Mandrakk>Overvoid. And we already know Mandrakk is equal in terms of power to CAS.

3 You Said So Yourself, There Can Only Be One Omini

True there can only be 1 omini, but that's when the theory of the Dark comes in. You see there are 2 types of infinity. Countable and Uncountable infinity.

The same basic rules of infinity apply to these characters. They are all infinite, but each has a varying degree of countable infinity. A writer can never fully describe infinity on a panel or issue. That's because we as humans are incapable of such comprehension. So to skip the hustle, our brains let's us use countable infinity.

What separates CAS from the others is that he has displayed the highest form of countable infinity when we look at his feats and his generall description. He never had to follow those rules because he was outside of existence. That's when dark theory comes in. No matter how much we discover using countable infinity, the amount of information undiscovered will always be higher No Matter What. In other words, goodbye fodder countable infinity ominipotents, hello uncountable infinity, aka "dark".

To conclude, scientifically and mathematically speaking, CAS is above Omnipotent

4 What About Azatoth? Isn't he Regarded As The Most Powerful Being In Existence?

As for Lovecraft's Lore about the "Blind Idiot God", there are many misconceptions to his dreams.The word "Boundless" is used to describe Azathoth. Even if taken literally, this is merely meant to say that his rule is boundless. Not that the entity itself has power or being that is boundless. Clearly being stated as the "Lord of all things", it would make sense that his rule is boundless. Although that does not mean he is unopposed, but that discussion is for another time cough Yog-sothoth cough. It also states that his throne sits outside the ordered universe, is that meant to imply that there is also a disorderly part of the universe? As stated before, a lot that is said about this being, and many Lovecraft beings, is an interpretation that people only support with the vague terms used to describe them. Honestly, a lot of beings from Marvel, by definition of their nature, far exceed Azathoth and Yog-sothoth. The Ultimate gods are the same thing as the Other gods. Again though, it is only interpretation.

That is really all that can be said about Azathoth. There are a few other descriptions of him in a couple other stories, but none of them are really as detailed as this. In "Dreams in the Witch House", the protagonist ( Walter Gilman) seems to look towards a bright star in the sky that is implied to be the Throne of Azathoth, even though it is only ever encountered in his dreams

The ultimate winner though is the very core of CAS, He has the Superman archetype; He's literally as strong as he needs to be, because he's Superman, and he has to save the day.

Blogs Created:
10 blogs
Most Commented blog:
Flash vs the runner vs zoom vs Black racer
Total Comments on blogs:
737 comments