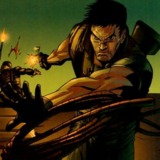 Black Widow Review: It's an uninspiring film that leaves much to be desired

I'm posting this blog because movie review links are broken on Comic Vine.

Imagine a film that places a protagonist as cool as Batman in an international spy film like Mission Impossible. That's what Black Widow could've been, but that's not what it was. Instead, the film was an uninspired rehash of Captain America The Winter Soldier and the Punisher season 1 with elements of Mission Impossible sprinkled in the mix. This is a crying shame because a Black Widow movie was long overdue ever since she was introduced in Iron Man 2 and this is what the final product ended up being is just downright disheartening. This film had so much wasted potential with a compelling central character and an interesting premise that was flushed down the drain. So without further adieu let's dive in.

Black Widow sees Natasha Romanoff dragged into Yelena Belova's plan to take down the Red Room. This could've been a compelling plot had the film been able to maintain the level of interest that the opening sequence establishes. When the film opens we see Natasha's family fleeing SHIELD agents and then going to the arms of Russian operatives. Those operatives then take Natasha and Yelena away and send them to the Red Room. That opening sequence followed by the opening credits was enough to hook me into seeing the rest of the film. Unfortunately, the film devolves into a generic Marvel movie that's extremely predictable. Here lies Marvel's biggest problem, their refusal to take risks especially with their movies. They want to stay on brand and not try anything new. Which they could've done with a character like Black Widow and made it a true international spy movie. Instead, the film is a generic action movie that doesn't feel like a spy movie at all aside from utilizing a few tropes I. E. disguises. There's no scene where Black Widow is sneaking around to obtain information undetected. Instead, it's we only get chase sequences and fight scenes with a balls to the wall third act that was ripped right out of Captain America The Winter Soldier.

In terms of characters, Black Widow only has two characters that are truly realized characters, Natasha and Yelena. Everyone else isn't fleshed out to their fullest potential or they just don't have any character at all. Natasha is depicted as being a spy with a mysterious past still trying to cope with her new life with a great performance from Scarlet Johansson. Natasha just wants to settle down as she escapes Ross and his forces, but is drawn into her adopted sister's quest to bring down the Red Room. For a film centered on Black Widow, it doesn't do much to elaborate on her backstory. All it does is answer some of the unanswered questions raised in her previous appearances and fail to establish anything new. Natasha also wants to repair her damaged relationship with Yelena and eventually her foster parents. Then leads her to want to repair the Avengers, which makes her sacrifice in Endgame more earned. However, that also means I know that Natasha won't die in her movie and I have no emotional stake when she's in any form of danger because I know it doesn't kill her. Also, having her enjoy James Bond movies was way too cheesy. Might have shown having Mission Impossible, Jason Bourne, and Jack Ryan movies as well with a bookshelf of Ian Fleming, Robert Ludlum, and Tom Clancy books. As for Yelena, she is Black Widow freed from the Red Room's control and is now out for vengeance. Florence Pugh plays the part to perfection and is a great counter to Scarjo. Yelena also is a reminder of what Natasha is and not who she aspires to be adding more to Natasha's character. As for Alexei and Melina, their characters could've benefited from more screen time. Alexei is a man who is a hollow shell of what he used to be and would give nothing more than to relive his time as the Red Guardian. He also wants to right his wrongs, but he has a hard time showing it. Which would make for an interesting arc had he gotten more time to shine. David Harbor nails the part. Melina has the short end of the stick being nothing more than the mother figure to Natasha and Yelena and giving exposition late in the game like reveling that Natasha's real mother was killed. It wastes Rachel Weisz's talent because I know from watching that she's capable of much more than what she was given. This also goes to another problem Black Widow has, “show don't tell.” We're told that Black Widow's mother is killed but never shown and denies us an opportunity to be emotionally involved. Imagine if the Punisher never showed us Frank's nightmare of watching his family die, we'd have no reason to care about the fact that his family was murdered. That's a problem Black Widow has it leaves no room for emotional investment and feels hollow.

General Ross is the same character we met in the Incredible Hulk the jerk general hunting the good guy. William Hurt was great but underutilized in the movie. Rick Mason, the Agent, is the guy to who Natasha turns for help but doesn't appreciate the timing of Natasha's requests. Yes, a very one-dimensional character. The villains are the characters the film does the biggest disservice to. Dreykov was nothing more than a lazy copy and paste of William Rawlins from the Punisher with elements of Alexander Pierce from Captain America included, except he's Russian. In fact, the Red Room felt like Operation Cerberus from the Punisher, a top-secret government operation that secret trains people into being military hitmen. Of course, with the HYDRA/Spectre/Syndicate Illuminati element thrown in for good measure. Yes, he was an original character created for the movie, but actually, write his character so it's interesting and not plagiarize other people's works. Seriously, he's got nothing to his character except that he's the bad guy. That brings me to Taskmaster the character who was butchered by this movie. Taskmaster is Dreykov's daughter brainwashed into being his greatest weapon, an agent that can copy the fighting styles of any hero. Which would have made for a cool villain had the film not made Taskmaster nothing more than an over-glorified henchman. I'm not kidding literally Taskmaster was just something for Black Widow to fight and she didn't even have her agency. It's almost as bad as the X-Men Origins Wolverine Deadpool. Also, Natasha is responsible for burning Taskmaster’s face in an assassination attempt to kill Dreykov, so why not give Taskmaster a desire for revenge instead of making her an over-glorified henchman. Yeah, the point being the villains sucked.

As for the presentation, the special effects were cool contrary to what Stephen Dorff said. The irony that Deacon Frost is criticizing a movie for its visuals. The action scenes were cool. I will say the film's usage of jokes does ruin some of the more dramatic material because the jokes are used to deflect away from the heavy subject matter. This again goes to my point about Marvel not trying to break their movie brand. So heavy material is broken up by a joke I.E. the forced hysterotomy joke. It doesn't work because that's something a film shouldn't make light of. Imagine if the "Penny & Dime" scene from Daredevil ended with a dumb joke, it would've killed the emotional connection the viewer had with the Punisher. Also why on god's green earth did they use a cover of "Smells Like Teen Spirit?" If you're going to use that song use the original.

In conclusion, I had my hopes high for Black Widow because she is my favorite female Marvel hero only to be let down by her only solo movie so far being an uninspired film that refuses to take risks. It's crime after being denied a solo film for nearly eleven years because it doesn't sell toys that Black Widow's solo movie is this mediocre film. Hopefully when the MCU is inevitably rebooted Natasha will get a better solo film than this.

Check out my recent Giantbomb lists

If you don't have a Giantbomb account that's fine. Signing up should be easy if things are the same as when I signed up. I just had to activate my account because signing up for Comic Vine automatically signed me up for Giantbomb and Screened(RIP). If it changed since 2013 you might have to provide an email address and create an account if you want to.

Here are the best Architects songs.

4. Gone With The Wind

6. A Match Made In Heaven

Ben Affleck Won't Be In The Batman, But That Doesn't Mean He's Done Playing Batman

With the recent reveal that Ben Affleck won't star in Matt Reeves' The Batman, and that a younger actor would be Batman, many have taken this to mean he won't be Batman anymore, this is not the case. If we go back to the original report from Deadline it says "This is the one that Matt Reeves has been attached to as writer and director. Ben Affleck, we hear, will not be donning the Dark Knight’s tights after playing the Caped Crusader in Batman v. Superman: Dawn of Justice, Suicide Squad and Justice League and that’s because this movie will focus on a younger Bruce Wayne." This doesn't say Ben Affleck is not going to play Batman anymore it means he won't be Batman in Reeves' movie because it takes place 30 years before BVS. This means Ben Affleck still has two more movies left on his contract. According to IGN, one of those could be Suicide Squad 2, this probably means he'll get more screen time than he got in the first movie. Another possibility, which was recently floated by Ray Fisher, is that Ben Affleck will return for Justice League 2. Yet another possibility suggests that Ben Affleck is planning on directing and starring in his own Batman movie, this was suggested by one of Affleck's staffers in October of 2018, his staffer told Hollywood Life "He is back in shape not only for his health but he has a new-found love on doing Batman at least one more time again. He feels he isn’t finished with what he wants to do with the character. There has been talk about replacing him, but he is now seeing what he might lose and really wants to play the character again. Especially seeing what Joaquin Phoenix is doing with the Joker character," and he continues with "He would really like to take the character of Batman and visit a more serious tone and side of the character and working with someone like Joaquin would absolutely spark his creative juices. He wants to figure something out with Warner Brothers to don the cape one more time." Other possibilities include Ben Affleck returning for Birds of Prey, or Nightwing or Batgirl, if those projects aren't canned. Right now all we know is that he won't star in The Batman, which disappoints me, but it is unknown if he completely done playing the character. If nothing else Affleck could do a Thomas Jane and return for a fan film.