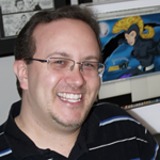 Scott D.M. Simmons is a comic book and card illustrator, known for his artwork for Star Wars licensees, the Arcana graphic novel The Dead Cell, independent comics like Our Super Mom, Halloween Man, and Hero Chronicles, and his creator-owned series Knights of P.O.W.E.R. His inking work has appeared in Image Comics' recent Hack/Slash collected volumes and in various Halloween Man stories. His sketch card artwork has appeared in officially licensed sets for Star Wars, Dynamo 5, Zombies Versus Cheerleaders, Sheena, Golden Age of Comics, and more, with base card art also done for a few sets. He has contributed art for Moonstone's Voltron: United and Drawn, New Comic Day, and Mr. Jigsaw. Other credits include Wannabez, Jenny Everywhere, Mute, Global Comic Jam, as well as various CDs, magazines, and educational books. He was once a photographer at Hasbro Toys, and is also a news and photo contributor for Comic Related. Scott and his wife live in the Cincinnati, Ohio area. His art portfolio can be found at http://www.scottdmsimmons.com and also on Facebook.