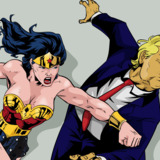 Well you better have some lube because she's been dead since 1993 and she was 88 then.

LMAO! I forgot I wrote that, it's still funny almost a decade later.

One of my picks for the template for Etta Candy proved why she was a good choice last night. At a rally for Biden she did what the Secret Service didn't do...she tackled a protester to the floor and this was her response...

She's Joe Biden's Senior Adviser and Wonder Woman in her own right!

So what did you think?

heres your English fuck you

LMAO! Okay that was hilarious, since when can you cuss like that around here? A mod should delete this whole thread, it's not worthy of a counterargument.

I thought it was terrible. Willow is going out with a whimper, bring on Orlando!

The first pages were phenomenal, the colors and splendor of storybook fantasy were wonderful to view. The reunion between Diana and Hippolyta was anticlimactic and I could see Nubia's turn coming from a mile away. I didn't like her design either. The first Nubia with the white streak and the last one with the dreads and lion armor were far better. This one looked too much like a Dora Milaje ripoff, but still it was great seeing her.

Grail, I gotta say she's grown on me despite how useless she was this issue. Her look is fascinating, I like everything about it and how it compares and contrasts with Wonder Woman's.

The final battle felt rushed and too one note but the beautiful art made up for it. Extra points have to be added for Isadore but I would have enjoyed higher stakes and more bloodshed. Maggie could have had a heroic death and I would have been fine with it but as it was I'd rather her injuries were severe enough to require the Purple Ray. Isadore being killed would have sealed the deal for Diana's enmity with Veronica Cale and elevated both her and Grail as villains, it was a missed story opportunity.

@scorpio_cassadine: What i don't understand is. Why many male heroes can be portrayed as very powerful while also having a good nature. Yet some writers think WW can't be very powerful without having a bitch attitude? We have so many great male warriors with codes, yet they think WW must be portrayed as a barbarian. A warrior woman that only cares about fighting and killing.

Some associate powerful women with bitchiness, especially coming from an all female society they assume hates men. They feel the need to dirty her up so she fits with the negative ideas they hold toward women. It's also done to be controversial and stick a finger in the eye of the political ideals she represents.