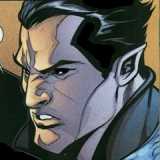 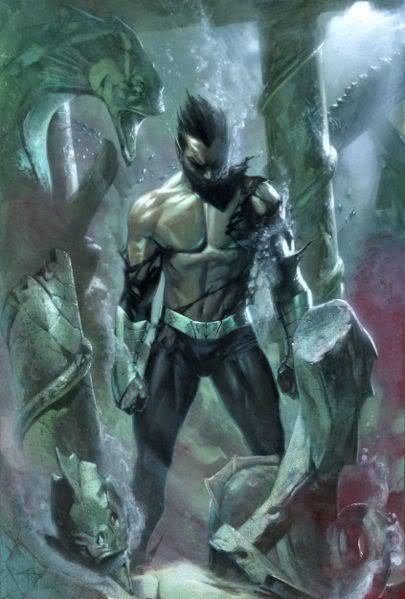 Optical--he lacks irises and has exceptionally large pupils which gives him excellent nighttime vision. His secondary, transparent lids allow him to see underwater without the visual distortion as well as protects his eyes from irritants.

His peculiar eyes make him sensitive to bright and sudden changes in brightness of light.

Auditory--his pointed ears grant him a wider spectrum of hearing than the average human.

This makes him sensitive especially to loud or high-pitched sounds.

Oral--his sharp teeth can easily puncture conventional skin. His tongue has extra nerve endings that can catch onto tastes directly or in the air. This works in tandem with his olfactory system.

Olfactory--his nose is more able to distinguish scents in the air or on objects especially when used in conjunction with his sense of taste.

He is more sensitive to humanoid pheromones.

Dermal--his skin is thin, stretchy, and highly sensitive allowing oxygen to pass through his skin and be absorbed into his blood stream. This grants amphibious breathing but also has an effect similar to blood-doping when used in non-aquatic situations. Most of his skin is hairless and has a slick quality rather than the softness of hair-covered hominids. He cannot develop callouses. His peak nerves within his skin give him a keen awareness to his body in relation to his environment. Sensing subtle vibrations or changes in the air can alert him to possible moves of an opponent making him react faster in some situations or more aware of someone's proximity. The dermis on the palms and fingers of his hands as well as the soles and toes of his feet have glands that excrete a substance that can create a sticky, suction bond on most surfaces which allows him to climb or hang from objects without a support.

The dermis is easily cut, bruised, and broken causing pain. It is not capable of tanning.

Musculoskeletal--his ligaments, tendons, and joints are looser and more of his skeleton comprised of cartilage than normal humans. As a result, he is light, flexible, and agile. His strength is average, speed slightly above average.

This looseness makes him more prone to breaks or dislocations which heal quickly but are very painful.

Metabolic--his body quickly processes energy from food but also from thermal energy to grant him incredible regeneration. He is able to regrow whole limbs or organs in under a minute. Foreign bodies or harmful toxins are excreted from his skin rather than through his digestion track which gives him almost universal immunity.

Apart from his sensitivity, colder temperatures can slow his healing slightly. Wearing more clothes to prevent chill reduces his full-body breathing and lessens his tactile, spacial senses. Either heat or being well-fed is necessary to maintain his regeneration at peak levels.

Cognitive--an implant placed within his brain scrambles brainwaves going to or from his brain making him immune to psionic attacks. He utilizes meditation and self-hypnosis to detract from the crippling pain effects of being hypersensitive. This also grants him unique control over his bodily processes such as breathing and heart rate. His intelligence is above average with an understanding of mechanical, chemical, and electrical devices.

Because of his hypnotic training, he is susceptible to suggestion by a skilled practitioner. Though not affected by the physiological dependence of nicotine, he is psychologically addicted to the act a and routine of smoking cigarettes and refuses to kick the habit.

After their ninth month at a secret YOUgenics facility, the twins ALEX X and ALEX Y were delivered from a synthetic womb and given to an interim foster family. The two were raised by Dr. Karl Lehmann and his wife but continually were sent to the laboratory in Switzerland for examination. ALEX Y was more seen by the scientists to monitor his unusual and controlled genetic growth. It was difficult to separate the siblings even in their early years.

When ALEX X was thirteen she discovered what they were doing to her brother. ALEX Y was subjected to experimentation involving chemical hypnosis, violent exercises of combat in his chemical trance, and constant genetic alterations. She informed her horror stricken foster mother who then smuggled the two out of the country to the United States.

ALEX Y took on the name Alexander Steele as a US citizen, but operated beyond the law under the alias of Scorn. He set up a repair workshop in the city with a basement devoted to special equipment and considers himself a "black market handyman".

Scorn is a synthetic mutate, and his DNA was spliced with animal characteristics, namely amphibian DNA. This gives him heightened agility and senses and he is also capable of rapid regeneration and amphibious breathing. His unusual features include black eyes with a set transparent lids, webbing between his fingers and toes, black claws, point ears, and elongated canines.

the feeling or belief that someone or something is worthless or despicable; contempt: I do not wish to become the object of scorn | [ in sing. ] : a general scorn for human life.

• [ in sing. ] archaic a person viewed with such feeling

• archaic a statement or gesture indicating such feeling.

feel or express contempt or derision for

• reject (something) in a contemptuous way

• [ no obj., with infinitive ] refuse to do something because one is too proud