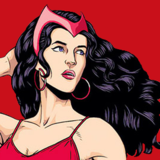 Do it for the comicvine.

Is Sinestro going to have control of Parallax again? So soon? That's disappointing. I found Cullen Bunn's first ~ten issues of the Sinestro solo series to be kind of so-so, but he really found some great footing with the character after a while. The last arc and the end of the series was especially good. It'd be unfortunate to see all of that erased!

I'm really glad that we get to see Simon get some new abilities! He healed his brother with his ring when he shouldn't have been able to, and now he has Emerald Sight, which seems like some kind of clairvoyance? It's very interesting. Hopefully Jessica will get something to define her, as well. I really like what I've seen of her.

My only concern is the characterization of the Red Lanterns. Atrocitus' rage comes from his entire family being slaughtered, which doesn't justify what he does, but it does add something to his motivations. It would be nice for it to be referenced. He kind of felt Generically Evil™ in this issue, so giving him actual emotions he has to parse through instead of being 100% wrath and unbridled rage literally all the time would help. He canonically knows what he does is morally wrong, but he believes his actions are necessary, kind of like Sinestro.

Also give Bleez some pants, please, someone. And let her scheme.