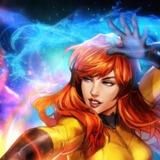 Im by no means a Brady fan, but I respect the skill. At his age tho, I wonder if his arm is going to just die mid-season like how Manning did in Denver???

Solo was ok. Rogue One I think is easily top 3 in the movie franchise

Face of the paper? The suggestion caught her totally off guard as she stammered somewhat at the thought. I mean...I thought we can both be anchors. That way we can cover more of the city. Divide and conquer, you know?

As for the name, the Daily Splash sounds good. The sounds of the police cars hovering over their location came to no surprise. With a flirtatious wave at a couple of the officers she saw that Century City couldnt be all that bad. Hey...Linda...why dont we introduce ourselves to the local police. Just so they know that their is a new business on the scene, she said as she bit her bottom lip toward one officer. Unless you know them already?

Hi! She said softly as one passed her by. Her wandering mind was broken by the sound and vibration of her cell phone. The tone was a familiar one, one that she couldnt ignore. She also only knew one person that would call instead of text and that would be Walter, the McConnell butler. Julie had an immense respect for him, Walter being the one who tendered to her and Ringo when their parents died.

Hello...she said with a joyous tone, expecting to hear the soft caring voice of Walter. @starspirit

@silence_thereof: @gambler: @jameswest007: I will post tomorrow. Was away for the Giving

@jordyn_hill: @silence_thereof:WIlliam is an NPC. Fodder if you need him

@jordyn_hill: yes, from what I understand

Linda's plea for Julie to grab onto something caught the red-head off-guard, as did the sudden shift in her weight as her body swayed harshly toward Linda, the driver and then to the door as Linda made the car swerve as if she was auditioning for the Fast and Furious series. The smell of rubber lingered in the air as she thought her heart would rip out of her chest as Linda slammed on the breaks.

There was a moment of appreciation that they were both still alive, her hands rubbing her neck making one final check that everything was fine as Linda winked. We are just full of surprises today arent we?

The dashboard of buttons in Linda's Subaru was quite fascinating, as were the flying cars revealing the great wonders of Century City. She heard the police sirens in the distance, but just as quickly she exited the vehicle, gesturing Linda to follow her.

Julie grabbed her phone, swiping it on to the selfie mode she was quite familiar with. She quickly fixed her hair disheveled hair, quickly realizing that heels should never be worn again in their future endeavor. Hello... Hello! I am Julie McCann, reporting in Century City. Crime on the street, has it hit too many of us. This station just witnessed a mugging in broad daylight, the person behind me the latest victim to chaos. Julie turned to the person gathering themselves on the alley street as her body shielded them and she spoke in a low tone, You okay? Want to do an interview. I can photo shop you out if needed.

As a person who just visited Century City, I too have experienced first hand the crime in the city. Will it ever stop. I dont know. Maybe the city needs a hero. Maybe it doesnt, but what it does need is the truth, and Century City can rest assured that Julie McCann will be there to tell it. Julie winked past her phone, trying to gauge any reaction from Linda as the news just fell into their laps.

@silence_thereof: @gambler: @mr__mercury: @jameswest007: @black_bullet: Its an add on, but to keep things moving, if any writer hasnt posted in 3 days then just move on and advance the story. Something comes up, and it does alot, please PM people

@cesc_bo_vera: you talking about spider man?