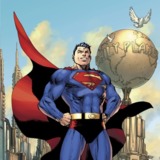 Trades hardcovers and the oversize books

I have been collecting comics for a while now and Ive notice some of the characters I like or comics i like to read are being collected in Trades Hardcovers and Omnibus books. I have been a bit hesitant to buy omnibus books due to the price but are they actually worth the buy? and would anyone buy them even though they probably bought the other comics in other trades?

What exactly is it? Is it all the comics in the store free or only certain ones?

Recently I have been reading some amazing series by some good writers. I have been reading: Venom and Uncanny X-Force by Rick Remender, Daredevil by Mark Waid, Green Lantern and Justice League by Geoff Johns, Captain America by Ed Brubaker, Ultimate Spider-Man, Avengers, and New Avengers by Brian Michael Bendis, and Action Comics and Batman and Robin by Grant Morrison.

I like all these series so far and I know they're written some of their own work. So I was wondering, what stories have these huys written that have been good?

I'm not sure if you users are sick of me of writting blogs asking weather what series are good to read or whatever. I write these blogs as I read some comics. Once I find a series that I really like or love(Uncanny X-Force), I like to see if I can find other series that might be similar that I might like. Everyone has their own opnion about these things and its good to see what others thing. I know Mark Waid's Irredeemable and Incorruptible have been recommended. So are their any other good original series or other series they have written?

I'm not really familair with Dynamite Entertainment, Dark Horse or Image Comics, I've heard the names and now I'm wondering who they are. I heard some of their characters like Spawn, Red Sonja, Hellboy and Witchblade. I want to know of their titles are good to read. I'm pretty sure I've said this before in my other blogs but I want to expand on some of the books I read aside from DC Comics and Marvel. I'm more familiar with them and it be nice to know some other publishers and their characters. I know I said about Dynamite Entertainment, Dark Horse, and Image Comics but if they're are any other publishers with good titles or characters it be good to know about them as well. If anyone or anybody can list a publisher, title, charcater, etc. that I missed that haven't been listed on this blog or on the relevant links, that be awesome.

Stupid title I know but couldn't resist. With the Avengers movie upon us and the current Avengers vs. X-Men currently going on, I figure it be a good time to post this blog. The Avengers have gone through a lot since they first appeared in the 60's and I want to know a couple things.

I would be good to hear some opnions on this. Everyone has their own idea what's good and what wasn't so it be good to know which ones are worth reading. Mainly it would be good for me who still getting the hang on comics to know whats good to read and for any fans of the movie or movies or shows want to get in to reading comics.

The X-Men have been around for a long time and over the years they had released a number of spin off titles ranging from other X-Men teams to having individual members having their own title such as Wolverine and Cable.

So out all the titles that are either ongoing or cancelled, what are some of the best X-Men stories that have ever been released. The story can be from any of the teams books or from the one individual members that have their own title. Please leave a comment, it be good to hear what are stories that are good or great or any varation of good.

Knightfall had three volumes but didnt have all the issues collected. Next Month they will rerelease Knightfall and Knightquest and later in the year they will releaase Knightsend. I was looking what they might have or will have and notice that they wont have some of the issues that was previously collected.

So I was wondering, is it a typo, like in the War of the Green Lanterns that I found or what? Is it a good idea or a bad idea to collect both the old or new? Or if you had the old editions to buy the new editions?

A while ago, DC Comics announced that some titles were going to be canceled after the eighth issue. Six titles will be ending and six new titles will take their place.

Hellboy, Spawn, & my reason for asking so many questions lately

Two characters from hell and have some kind of gun that they use as a weapon. I've been looking g into these characters & both of them seem really interesting. I have some questions about the two though. Some questions might be the same.

I know lately some of my previous blogs or most of them have just been me asking kind of dumb questions like is this series any good or what’s a good recommendations for this genre. I only ask because I want to expand my reading from Superman to Spider-Man. They're great heroes and are famous; it would be nice to read some other comics that feature a darker character like Spawn. These questions might get annoying but I figure I should ask them here and if anyone else has the same questions as I do, they can look here and see whoever comments my blog recommends.

Buy superhero team books because my favorite character is in it?

I like a lot of characters in the comic book industry. Ranging from Superman to Wonder Woman, from Batman to Green Arrow, and from Spider-man to Iron Man. As well as Wolverine to Cable.

There have been a lot of team books ranging from as old as the Justice Society to as recent as Wolverine and the X-Men.

So here is the question: Is it a good idea to buy a title because a character I like makes an appearance in the title or because he's a member of the team?

I hoping to hear some feed back on this, because there are some characters I like such as Wolverine who make an appearance in multiple X-Men books. It sounds like a dumb question to ask but I want to hear or in this case read other people's opinion on the matter.

Blogs Created:
40 blogs
Most Commented blog:
DC Characters who should get a Live-Action Movie
Total Comments on blogs:
365 comments