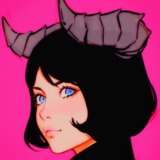 Here we go, the world is spinning. When it stops, it's just beginning. Sun comes up, we laugh and we cry. Sun goes down, and then we all die~~.

Aliases: Sam, Prada, Baby Devil, that Girl from "The Ring"

Alignment: Varies with her mood

Family: Sister or half-sister to hundreds of entities

Appearance: Very attractive, and able to spawn horns, hooves, wings, and a tail

Hellish Martial Arts: During her many, many years of existence in the lower realms, Samara had ample time to indulge in the study of martial arts. Among these, she has trained in the sword-fighting styles of Enath and Illmoxod, the folk wrestling of the Bloody Isles of the Fifth Circle, and Agruz - a kind of boxing developed by four-armed creatures. This forced her to learn how to read many moves ahead, given her disadvantage as a small, two-armed demonkin.

Human Martial Arts: A frequent traveller and visitor of the earthly realm, Samara has taken a liking for human forms of combat. She's had many opportunities to learn granted by her long lifespan, such as training with the legendary gladiator Flamma. Her time on earth added to her repertoire a large number of styles. A few of these include pankration, systema, savate, brazilian jiu-jitsu, judo, wrestling, muay thai, and kyokushin.

Experience: Samara's existence as Lamashtu can be traced back some five or six millenia. With this obviously comes a lot of experience. She can speak nearly all human languages, living and dead, having been around since before many of them came to be. Because of her cunning mind and long life, Samara also happens to be a polymath in a number of areas, her favorite being architecture, history, art, and literature.

Possession: As a demon, Lamashtu can switch from body to body. As long as she is connected to her host, she has access to every memory of their prior life. The host's body receives her own supernatural traits, namely strength, speed, durability, and endurance far above human limits, as well as demonic characteristics such as horns and hooves. In Samara's case, she took over the body of a girl who's soul had departed after a hit-and-run accident, yet who's body was salvageable, thus becoming a sole proprietor over it.

Hellfire Flames: Having been born and raised in hell, she has control over as well as immunity to the flames, ever present in the lower regions.

Witchcraft: Samara's abilities extend much further and has deeper roots than that of many demons because of her great affinity for earthly magics. Being a part of the second generation of demonkin, born of fallen angels rather than created by the hand of the Great Adversary, her raw power is not particularly impressive. However, despite being a fledgling by hellish standards - a mere 6,000 years old, Samara has acquired an incredible versatility and diversity of magic repertoire, such as many jinxes, hexes, and curses, as well as nature magic. These skills, combined with an unshakeable confidence - in proven ability, mind you - enable her to face foes with souls stronger than hers.

Unholy Magic: Having been raised in the Second Circle, a place where the lustful are punished, Lamashtu mostly learned the spells belonging to that region. Among the Circle's spells an emphasis in the control over wind can be clearly seen, as Dante's Inferno accurately remarked. Being a former temptress, she also studied empathy greatly.

Necromancy: Having conducted a few experiments alongside a certain famous witch in the village of Endor, Lamashtu learned the magics of necromancy. Though she is hardly the strongest enchantress in this respect, she can come in contact with the souls of both the damned and the blessed dead. Should she have access to a corpse, she is able to revive them as either a living-dead servant or, should the body have died very recently, return the soul to the body so that it may carry on living.

Holy Magic: Like most infernal beings, holy magic is a weakness of hers. Being a hellspawn, any powers which are divine in nature pose a serious threat to her, being capable of damaging her soul. Strong enough holy magic can and will kill her should she come into contact with it.

Consecrated Grounds and Items: As you would expect, among these is holy water. Though it is not damaging to her, a sufficiently blessed area, object, or substance can still be painful. Standing in a temple consecrated to the Enemy, for instance, is rather bothersome, though not necessarily mortifying. This is enough to make it so that she never sought to set foot inside the Vatican walls.