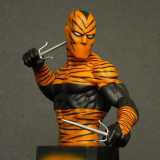 Time for the comic purge!!

Throughout the day I have been bagging and boarding stacks of comics I have purchased the last couple months and realized I have been collecting way too many Marvel titles. I am a huge Marvel fanboy so majority of my comics are from that company but I do collect a few DC titles. The downstairs bedroom has stacks of issues on the desk, entertainment center and floor....talk about clutter. Comics today are so expensive and I definitely need to cut down my list for economics sake! I decided to stop my DC titles and some other Marvel titles like Avenging Spider-Man, X-Force, New Mutants, Punisher, Ghost Rider and others. I would like to cut my list to 10 Marvel titles or less because it would definitely save me more $$$ and space. The problem is that I am such a huge comic nerd and very impulsive when it come to various purchases. Well desperate times require desperate actions so let the comic purging begin!!

Any of you guys ever had to deal with something like this? If so, what did you guys do or any advice you recommend?