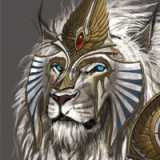 I am in need of an Enemy.

I need an arch rival...anyone willing to take up the mantle? Preferably someone who has been here for atleast 8 months.

For as far as time went back, humans were the dominant species of all in the cosmos. But when supernaturals were first cast unto the earth, the human civilization went in to direct fear. Soon it got to the point where the mutants and such were killing off the humans with little work. Like taking candy from a baby. In retaliation the most intelligent female human scientists, formed a group. The group was known as S.H.E. Super Human Exiles. With the combined wit of the scientists’ they formed an undetectable gas. Formed from many different unnatural resources. The gas was designed to give the supernatural beings an illusion of their greatest fears. It would bring no harm to them but hopefully scare them enough for the human society. However, one of them hated the super humans so much that they got greedy with the formula and made the tier of the gas about 50x more powerful. What could the gas be capable of now you ask? Well the superhuman society will soon see.

(Basically, you have breathed in the gas and you have begun seeing all of your fears, whether from now or childhood, come to life. And try to destroy all of Earth inhabitants.)

Blogs Created:
2 blogs
Most Commented blog:
I am in need of an Enemy.
Total Comments on blogs:
45 comments