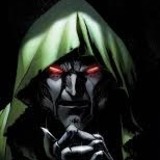 Working on a massive George Perez checklist gallery really drops into perspective just how amazing the man's art really is.

please delete these two duplicate issue pages for me. I had a numbering format accident.

It's not Bendis' fault. There's this thing about writing The X-Men that turns an otherwise decent writer into an incomprehensible mess. Back in the day Chris Claremont was even a decent writer and after writing X-Men for so long it messed that poor man up for life. It's like possessing the "one ring" of power. Writing The X-Men is all pretty and shiny on the outside, and it pays for your new house, maybe a car, but eventually you're gonna find yourself eating rancid fish heads, choking on your own phlegm and skulking around muttering random, barely comprehensible bullshit like "Cyclops is bad guy my precious," and "Wolverine creates the first X'mens team, yes it does." It's a good thing that Fraction got out when he did, but he did give us "Fear Itself."

... or maybe it's just the fact that the dude's workload has increased logarithmic-ally in the past few years.

Okay, come on everyone this was a brilliant little teaser for a comedy. I know we're all comics fans and crotchety, premature, and over-reactive are our favorite descriptors, but this was a really smart and funny way to tell everyone there's a new marvel trailer coming.

@smashbrawler: No, I get that. I was being hyperbolic. It's just that... if you depressurize a plane in mid flight, especially if you open up a hole large enough for a man to easily get through, everybody's gonna know. Just sayin'.

So I finally got to read all of Multiversity #1 and it was even more mind blowingly awesome than I expected, (and it's Grant Morrison so I expected a lot.) I just had one tiny little problem with it. There's a scene where President Superman has to meet one of his Generals and the Air Force 1 security staff aboard the plane which is clearly already in flight. There's even a cool panel with the Superman flight streak catching up to Air Force 1 in mid air. My question is, "How does he get into the plane without the whole tube decompressing and everybody flying out the windows and whatnot? In fact, in the following panel he's discussing his 'power nap' with his assistant and presumably no one is any the wiser." Did this bother anybody else or am I the only one nit-picky enough to have caught this?

This is an excellent idea for a feature and I'm really glad you started with Gail Simone. She brings a unique voice to her writing, and her handling of Babs and Nightwing's relationship is a lot of fun. I enjoyed her work on BoP. She followed Chuck Dixon which is not something any sane writer would ever want to do, and I really like aspects of her Batgirl...however that being said, I have to vote for her Secret Six run. Secret Six was Gail firing on all cylinders, and her take on Catman reworked a character that had little to no relevance in the DC universe, and actually made him someone to root for.

Some ideas for future features:

Alan Moore - From Hell and V For Vendetta

John Ostrander - The Specter and Grimjack

Dark Horse is not on Comixology because they have their own digital comics site: digital.darkhorse.com.