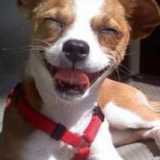 Roxanne is a manager at Oxford Comics in Atlanta, Georgia, the largest comic retailer in the Southeast. She's also been an art director, graphic designer, comic book letterer and advertising illustrator. She has a Jack Russell Terrier named Velcro who has quite a reputation among the Atlanta comics community in his own right. Ms. Starr rescued him from Jim Royal, the inker, who couldn't deal with Velcro's endless shenanigans and anti-human behavior. Check out the Lapham illo in her sketches gallery ( HERE ) to see Velcro in one of his rare non-hostile moods.

Roxanne was born in Paris, France, of German parents and came to New York City when she was two. Her art career started when she was still in high school when she took a summer job as a colorist for a textile design company. She graduated from CCNY with a degree in Art and minor in Philosophy and took commercial art courses at the School of Visual Arts. When she took a leave of absence from college, she worked for two years as an editor at The National Enquirer. Her first art job after college was in advertising for a Madison Avenue agency.

She relocated to Atlanta in 1980, working as a freelance graphic designer. In 1982, she began lettering comics. In the middle part of the 80's, she became one of the first letterers to create her own fonts on the computer. By the early 90's, Roxanne moved up to magazine art direction at her "day job", employing several of the comic book artists who she knew through her lettering work, to do editorial illustrations. Notable among these were Dave Johnson, Craig Hamilton and Mike Zulli.

The bulk of Roxanne's lettering work was done from home, sometimes with the aid of an assistant. But for a time around the turn of the century, she worked out of Tony Harris' JOLLY ROGER STUDIO in Macon. Other studio mates included Andrew Robinson, Drew Geraci and Ray Snyder. The most remarkable fact about Roxanne's work in comics is that she only lettered full-time for less than two years, but she is better known than a lot of other letterers who lettered for decades.