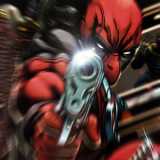 The Beginning and Manticore

Chase was genetically engineered, and carried to term by a previous genetically engineered women named Max Guevara as known as X5-452. He was a second generation created for a secret government super soldiers program called "Manticore", then located in Gillette, Wyoming. His mother was one of the last X5 soldiers that didn't die from a later unknown side affect of that made their DNA unstable aging them rapidly, once her fellow X5 started dying off she rushed to find a cure and ended up getting recaptured by Manticore and was soon experimented on to find out why she wasn't affected like the other. So using her DNA as a new base scientist engineered a new child and implanted him into to her, thus creating the first and only X6 super soldier which in turn lead to Max's death. As with almost all Manticore's soldiers, Chase has a bar code on the back of his neck, with his identifying number sequence (1303338000000012). He is an X-6 model and is thus referred to as X6-012. Chase Guevara is the name that he gave himself after finding out his mother's last name.

all X5's are human/animal- transgenics hybrids, or Chimeras. They were genetically-engineered at Manticore's highly advanced genetics labs by splicing together genetic samples taken from numerous superb human specimens with a sample of feline DNA, most probably taken from a member of the Leopard or Tiger family. After the bio-engineering and in-vitro work was performed the X5 embryos were implanted into surrogate mothers, a group of young women who carried the super soldiers to term in exchange for a considerable sum of money provided by Manticore. After birth the X5s were immediately taken from their mothers and placed into the care of Manticore handlers. As the X5s matured and grew, they endured rigorous and brutal physical, mental, and psychological training intended to supplement their superior abilities with advanced special forces training.

Although outwardly he appear to be ordinary humans, Chase possess abilities that far surpass the human norm. Though feline DNA isn't the only DNA that is used to enhance the X6 physical combat abilities. Chase also has a fusion of a rachnid DNA which granted him superior strength, speed, stamina, reflexes, agility, and durability as well as exceptional night vision and greatly improved olfactory sensation and auditory perception capabilities. But also it grants him a danger sensory (spider-sense) and ability to cling to almost any surface, and he can also create organic webbing that can be dispense from a gland in Chase's wrists. Combined with two-to-three decades of advanced training in martial arts, close quarter combat. sharpshooting, firearms, stealth maneuvers, infiltration, espionage, communications, languages, electronic-hacking, and computer technology, like the X5s Chase quickly grew into extraordinarily powerful and astute soldiers and fighters. Like his mother Chase is unique among the X5s in that he possesses no junk DNA, every one of his gene sequences was coded the same as hers by Sandeman, the original maker of the transgenics, for a purpose. His unique DNA is somehow related to thwarting the Familiar breeding cult's plans to become the dominant species.

For over 15 years Chase was was verbally, mental, and physically groomed in the walls of Manticore, being an an X6 he showed even more promise of being the ideal soldier even more then the X5R. Among all his peers Chase was far superior for over four years he stood undefeated in unarmed combat, and could hit a bulleye of a target with a sniper riffle from over 350 meters out. Even though he excelled in hand to hand and markmenship, he truly shined in computer technology hacking almost any level of encryption in mere minutes. Around the age of fifteen his hacking skills had become greatly advanced to the point that he had to challenge him by going into the Manticore mainframe and pull up classified documents that not even the president know about or had clearance too. This is were he found the files of the original X5's, one persons file caught his eye the one that belonged to X5-452 the photo on file looked formilar. Unknown to him yet but that was his mothers file, as he read on he learned how twelve X5's banded together and escaped. Living on the run for over a decade, moving from foster home to foster home. The rogue X5's were caught or killed one by one , and among the last ones to be captured was X5-452. As he tried to read more on her, he hold that her file was more secure then most of the other file in the mainframe. It took every trick he know but after twenty minutes he finally cracked the encryption on the file, an d uncovered that X5 -452 was part of an experiment that led to the birth of the only X6 in Manticore to date. Yet after it was a success she was soon terminated with out even getting to hold Chase once, as he continued to read though about his mother Chase came across the name she gave herself.

After reading all of this it took some time to sink in, and to not show any signs of anything be wrong he continued to excel in his training as he tried to come up with a plan to escape Manticore like his mother and the others did. Under the cloak of night during a shipment transport, on the other side of the compound Chase swiftly moved he knew that this would be his only chance for freedom for the next few months. Do to combination of him being a transgenics and the advanced combat training he had been receiving since he was a small child the few guard on duty would have been better off if they were practice dummies there for show. Hindding with the transport truck which had only gotten about halfway to main highway before the alarms were finally set off. Spot lights scrambled along the grounds trying to find the AWOL X-6, with his freedom so close the truck stopped and Chase's heart froze for second. He didn't want to go back he was done with the torture and the brainwashing he knew as soon as he first started planing to escape that he would have to fight from then on out. Right as he perpared to strike the truck started and continued on the main road, letting out a silent sigh of relief he wrapped a blanket around his body and road a few miles to make sure he was away from Manticore. While it was still moving the X-6 Leaped from the back of it, he held the blanket close to his body so it wouldn't flap in the night wind and possibly be seen by the driver. Chase's first taste of freedom wasn't what he expected it to be seeing that in his rush he only left wearing the sweats and sweater that they were issued to sleep in, along with the blanket he stole from from the transport truck. Walking along the road for a few hours the lack of food and the cold weather finally caught up with the transgenics hybrid, and he collapsed on the side of the road, lucky for him a couple in there mid 30's where headed home from their vacation when they discovered the X-6 laying on the side of the road. Not really sure on who he was, where he came from or what to was the right thing to do, the couple knew they couldn't leave him there so they took him with them and after getting him cleaned up and fed they tried to get answers on where he came from, reluctant to speak for the first two weeks Chase just stayed in the room they provided for him. Over time Chase defenses towards the Millers faded and they eventually adopted him still not fully knowing about Chases origin Tod and Samantha over looked for they figured he would tell them when he was ready.

Want a little more into his origin click here

As a thin, incredibly strong line

As a fine, quick-spreading spray

As a thick, tremendously adhesive liquid.