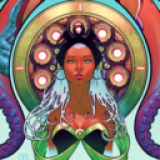 Bey, Mama Tina, and Blue arrive at the studio and prepare for the photoshoot. They begin getting painted in the dressing room...

. Beyonce: ...but Mama, this Shingles dude tried to come for me. I AM BE-YON-CE. I was in the iconic Oscar nominated film Dreamgirls!!!

Tina: Oh hush up chile... *glues edges of Bey's wig down* I'm sure she'll be working for us soon enough....we could use another nanny for Blue. Lawd knows that Hilson girl we hired lied on her resume. That reminds me, you need to tell her ass to go to the left, b/c the bish can't do anything right!

Beyonce: Hilso.....oh you mean Keri.......but if we disown Keri, who will hire her? She already got fired from Wal-Mart and Bugrer King for turnin tricks in the parking lot w/ that Cici chick. Oh well, maybe being a two dollar hoe is her destiny....and if that's the case...destiny fulfilled!

Beyonce: Kelly! You made it!

Kelly: Anything for you, gworl! You ma sista! I love you Bey......So um, Solange and Michelle are still...

Beyonce: Ugh! Kelendria, Imma just stop you right there. Those bitches already know if they can't keep up w/ their chores, they don't get to come to the photoshoot. Don't forget y'all work for ME. Y'all don work that 9 to 5, I ain't gonna cut that check. You go on and be their motivation, Kel. Right now I needs to pour this jelly into my freakum dress and get mah face beat down harder than a cunty named Rihanna! Lil baby Blue sho did a number on my body-ody-ody.......that bitch.

*Blue cries in the background*

Kelly: When Jay getting here?

Beyonce: Gurrl, he still out w/ squirrel-friend Kanye shoppin for Louis Vuitton bags. Hova's a great father tho. Blue is so in love w/ her daddy...

@Slight: IKR. Just when I was starting to really like Willam, they disqualify her? Dafuq?! Supposedly they're not even gonna spill the T about what went down till the reunion. The whole time I was like ...if we're going to knock Willam off we need to snatch Raja's crown back while we're at it.....cuz let's be real, last season was soo rigged! It would only be "fair" right, Ru? ...On the plus side we got Willam covering Wilson Phillips and bitches eating chicken. What's not to love?

I must confess, I do love me some Madonna from time to time. ...Something about her new song "Gang Bang" (yes, gang bang) makes me wanna do a few lines of booger sugar and dance up a big gay storm in da clurb!....maybe that's just the mo in me talking. LOL

Look what I found!

@Slight: Heeeey boi hey! Long time, no T. I'm all caught up on my Drag Race tho. Latrice shut the library DOWN! I really dislike Phi Phi......Glad Jiggly went home, but may I just say both her AND Willam's lipsync were awful! ....Sh!t is going down on Ringer too! I'm really getting into it now. .........As far as our little RPG goes, I'm open to any suggestions.....(I'm kinda surprised it's gone on as long as it has tbh.) lol

. Of course, darling. I am Robyn Rihanna Fenty. Wouldn't you feel di same if you had dat name?

Interviewer: Excellent point. lol .....However, there's a certain Brit booger who insists on continuing her tirade of hateration for you. She accuses you of being mad and threatened by her game and insinuates that she is levels above you. Your response?

Slayhanna: TBH, I'm done w/ this poor "gal". I've tried to get her help....give her advice, let her stand under by umbrella. She's blind, deaf, and dumb to it all. I guess she couldn't handle the shade of it all and sadly.......may never see the light again.

Interviewer: So she's a hopeless case?

Slayhanna: Yes...and let's be honest, a very disturbed rude boy at that. This hoe got me sayin "SOS" plz! Someone help me...get this bitch off my coattails. The heffer is weighing me down. It's not healthy.

Interviewer: Speaking of Adele, would you say she's using big names like her and yourself to stay relevant?

Slayhanna: Well, it's pretty obvious. It's all she can do really....to try and level up to someone like me.

Interviewer: Mhmm....who could forget the infamous 09 "incident"...*shakes head* Not even GLAAD could defend her once the shocking video receipts of her "pearl diving" for your precious Bajan beaver were released...

Slayhanna: We'll never be "scissor sisters", but I've moved on w/ my life and I hope Summer can do the same.

Slayhanna: That's just what we call her now........She's just like summer, no class.

@Slight: Patti and that whistle register tho! LMAO ....I'm still a few eps behind on Drag Race. LIVING for Sharon, but I'm also loving that hungry hungry hippo Miss Latrice! The McMichaels' Chad and Kenya are cute and that Dida dude lipsync's like the rent is due tonight! Watch her twerk it w/ that little ginger snap XD...

I don't really care for Willam for some reason. He and Phi Phi are shay-Tee but too stuck up...like they tuck too tight or something. lol

Slayhanna: Sour? Old? Transvestite? I know you're reading off your resume for me, but you can stop. Illuminati obviously chose me for a reason. My Navy is an unstoppable and unsinkable juggernaut that's been destroying any and all basic bitches in my path since '05. I am HBIC and captain of my own ship. You just some washed up sea hag leech clinging to my poop deck for dear lyfe.....but guess what, I'm about to make a bitch walk the plank! *kerplunk* (fyi: that'll be the sound of your music career hitting rock bottom very soon)

What I wanna know is who in their right mind asked you to do all those covers??? Your co-workers at the Dollar General? Obviously Nina and Sam never heard of you, and I KNOW my great aunties Houston and Ross never gave you permission either. Bitch, anyone can cover a song. I've done everything from Oasis, to Lauryn Hill, Bob Marley, Prince, Sheila E, hell even Lynyrd Skynyrd

. I've also actually worked/performed w/ Elton John, Bono, Jay Z, Eminem, Bon Jovi, Coldplay, Slash, Kanye, Adam Levine, etc. I could go on forever really.....but I get it. That's what you do. You a busted, poor man's Janelle Monae. You and your lil doo woppin floppin hooligans are nothing more than a Ronnettes/Marvelettes/*insert here*ettes cover band who thought y'all could ride on the success of the 2nd invasion of your fellow brits a la Adele and Winehouse. However, I do appeciate your acknowledgement of my accomplishments and I commend you for...well..... just trying to stay relevant. Keep on faking it till you make it, galfriend. -_^

...Normally I wouldn't remember nobodies like you and your two albino bear cubs (I know y'all are dying to collaborate w/ me...LMAO), but I'll never forget the first time we met back in '09. Funny thing is we were actually at one of my boss daddy L.A. Reid's shindigz where I was presented w/ more platinum while you and the other newbs performed for me. What started out as a simple altercation, turned into a real sticky situation...

I don't wanna go into the gruesome details, but we all know you were lustin after my coconuts all night and attempted to ..."bump clams" w/ me. >_<

I never told anyone this, but you where actually the inspiration behind Man Down. ......Luckily things never got that far, but if you ever pull that ish w/ me again we can play russian roulette ....and you will lose. Don make me pull di trigga, pull di trigga. pull di trigga gal, BOOM!

Don act all naive to what happened, you know damn well what it is. I'm setting up a homebase in London soon and bitch, you betta not enter my enclave. Told you I be takin ova your empire. Now make way for your Bajan princess! Go on.... take a bow.

Slayhanna: Word of advice mama, don't come for me about shabby resumes when we're not even sure if yours exists. I'm not gonna waste my time trying to find 3 y/o "Dusty Old Farts" receipt(s?) for you b/c that could take all day and I've got wigs to snatch and records to slay. People don even have to check for me and my credentials b/c I'm an international bitch...it's just a known fact that that Rihanna reign gon be takin ova your empire. My credentials may seem shallow, but that's only b/c my body ody ody is all you ever wanna focus on. Once again, you're fantasizing about getting your filthy paws on my golden snatch. As your drag mother Sensei Caliente would say....

*GAG*....Speaking of drag and all things grotesque, what the frock are you wearing in that pic??? You look like a tranny hooker trying to hitch a ride after getting gangbanged by a pack of gay poodles. That or you just crawled out of my "bestie" Sh!tty Perry's lady hamper. ...Btw I only use that talentless twat for the publicity...not that I really need more.......and I never said Adele and I were friends. We just run into each other so often between award shows, we occasionally talk tea. Too bad she don't flock w/ you anymore. She don't even look your way. >_>

Quit hatin on me cuz you know I look good. My hair done right and my snatch real tight. All eyes on me, I took the night your LYFE! :P

Im assuming none of you watched the Brit Awards?

I watched a couple clips online. Adele's such a classy broad. ;P