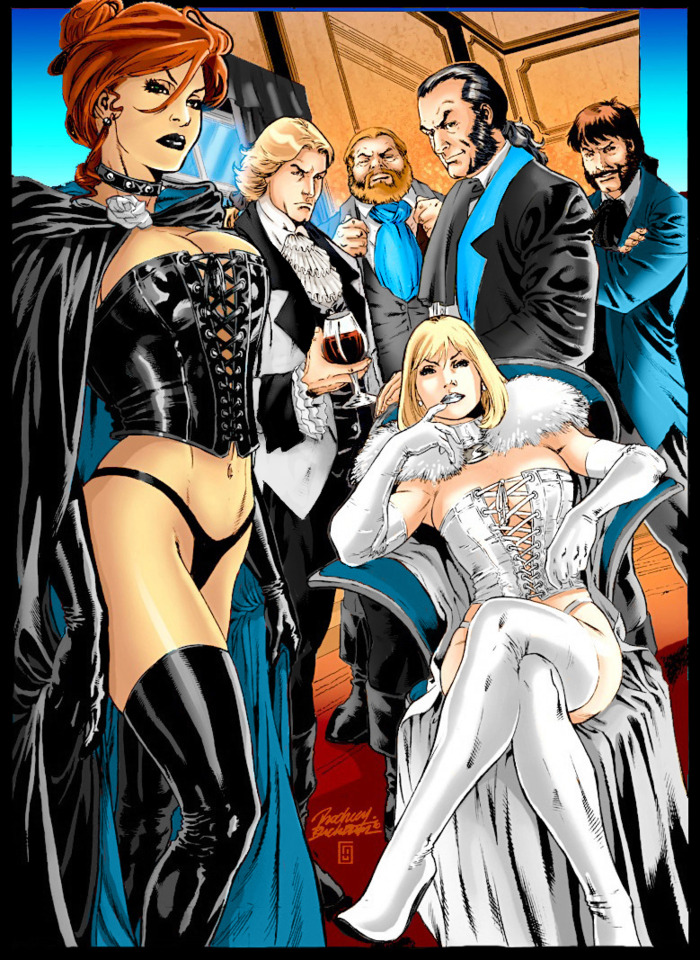 Originally formed in 350 CE under the name Rimefrost Cult of Visigoth Germany, the Rimefrost Society is one of the oldest and exclusive organizations still actively in existence. From its conception, the RFS has sought ways of augmenting their existence by means of mystical and scientific advances. Their goals range from conquest to protection of the globe. The primary purpose varies by generation but will always focus on the acquisition and maintenance of power.

The Rimefrost Society across the globe is accessible only to the most elite of society, those deemed the most influential, powerful, and wealthy. As such, the halls are lavishly decorated with entertainment varying from the elegant to the debauched.

Rather than being multiple international locations, the singular Rimefrost Society estate has been sequestered into a pocket dimension accessible from any of the current branches throughout the world. The dimension was created using the time distortion and portal magic of the Society's benefactors. An enchanted ring is given to each member at their induction that allows them to pass the threshold into this Rimefrost dimension. The displacement provides great protection from invasion and safe travel for its members to any of the branch locations. Time progresses similarly in accordance to that of the outer universe, but it should be noted that there is no connection to the outside world except via the portals or other means that can transcend the space-time anomaly.

The Rimefrost dimension's portals was created using the portal powers of Allure's power ring. Each member of Rimefrost Society is given a ring to allow access through these mystically attuned portals. The system is protected and maintained by the Keeper of the Rimefrost, a position filled by a capable member of Rimefrost as chosen by the Monarchs.

The Venezuelan Branch of the Rimefrost Society was brought into existence by a number of highly established meta-humans including an agreement between the former King, Xenon and the Shogun. As per the agreement, the Shogunate of Venezuela branch is accessible only to mutants or those approved by the Venezuelan security. Other branches remain open to a wide variety of members.

The early Rimefrost Cult was originally divided into four houses based on the magic practiced by the families: ice, earth, fire, and air. Water represented the value of change and incorporated hydrokinesis. Earth was the representation of substance, and associated mages utilized terrakinesis. Fire was the depiction of power and raw potency, its practitioners making use of pyrokinesis. Air was concerned with freedom and the mysterious and corresponded to the practice of aerokinesis. Each sought to develop a mastery over their respective elements and idealistic strengths, combining to make the cult into a potent force of elemental prowess. (It should be noted that the foremost house of ice was deemed such as opposed to the pure substance of water to present the coldness to balance the heat of fire. Each element has its own counter: ice to fire, earth to air, each corresponding to a direction, north, south, east, and west respectively. South was considered to hold the heat of fire while the north held the cold of ice. It also held importance to the four seasons also associated with each element: ice was linked to winter, earth to spring, fire to summer, and air was to autumn. Intersection and the distinction between the four elements was immensely important to this early cult as was the elements’ relation to the world at large.)

During the Middle Ages, the RFC was responsible for the maintenance of knowledge gained during the classical period, fighting the more superstitious and divisive sects of Christianity. Eventually the organization was reforged by a man by the name of Gregory Reza and his half-brother Jacque Quentin to assimilate the cult with the foreseen expansion of humankind into mutants. The name was changed to the Rimefrost Society. Deviating from a predominantly magical focus under the new leadership, the name was changed to the Rimefrost Society as its roots spread further through Europe and the Middle East, even into some parts of Asia and North Africa, then to the Americas and beyond, their involvement being secretly involved in some of history's worst atrocities and greatest advancements. Each of the old houses evolved accordingly. As it’s predecessor, the house of water was considered the element of change, so the Frost Monarchy was concerned with genetic mutation, the natural progression of change from one society to the next. It became the sect of biological sciences under the patronage of Q. The house of earth was the representation of substance and thus became of the Metallic Monarchy of physical sciences and technology, the use of natural materials to create or facilitate an end. The house of fire concerned with present power and potency was converted to the Flame Monarchy which concerned itself with political and monetary power. The house of air was concerned with freedom and secrecy and so naturally transitioned into the Shadow Monarchy concerned with the sphere of general magic and the arcane, the purest remnant of the old Rimefrost Cult under the guidance of Rezurrection.

Centuries later, the power structure within the Rimefrost Society is less rigid. Monarchs and nobles of all sects often combine their methods to be powerful beings in the modern world. The maintenance of the titles is more for tradition than functionality and is used to better organize the hierarchy.

Considering themselves all kings and queens with an almost divine right to rule, each prominent member is given a colour and a ring to signify their station and to grant a minor control ability over an elemental force that manifests from their form (shadow/phase form, stone/metal form, ice/water form, flame form). The rings were created by Christopher Frost at the behest of Q, the unique formulation finally refined by the empath. Each ring will be linked to the monarch's DNA so as not to be usable by other people. The rings can be destroyed and will be should a monarch be expelled from the order. Each Monarch has authority over their own courts known as the nobility. These nobles receive their own ring of passing and are usually considered for the monarch position should the respective royal die or be removed from the society.

MONARCHY OF WATER -- THE IVORY IMPERIALS

MONARCHY OF EARTH -- THE STERLING SUPERIORS

THE MONARCHY OF FIRE -- AZURE AUTHORITIES

THE MONARCHY OF AIR -- EBONY EMINENCES

(received a ring of passing for trial membership)