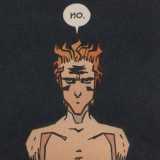 Superman's punches against Steppenwolf shook the whole reactor chamber and Superman's heat vision is no longer just under 5500 Degree's Celsius. It is now 3.5 Million+ Kelvin and before ANYONE brings up the Batman blocking the Superman heat vision and Cyborg TANKING IT.

1. It is stated in the film that Alfred managed to use the Kryptonian scout ship and made gauntlet armor out of it (which in my opinion would have made batman v superman a whole lot better) This is the same material we see get super heated to 3.5 Million Kelvin when Silas stone and the atom test it. So yes Batman had a logical way to BLOCK Superman's heat vision for a time.

2. Cyborg is made of the mother box that can also withstand these types of temperatures.

So yes a reason why Snyder Superman version is better than whedon's despite the WANK and slander of "Snyder is weaker because Stepp wolf is more durable and better strength showings/building" Let's clear things up. Originally this was suppose to be rated R but WB and Whedon made it PG-13. Do you HONESTLY think they would want Whedon wolf to be done in with gallons of blood coming out of his neck? Hell not even Thanos had a lot of blood coming out of his neck due to PG-13 rating.

We also finally get CONTEXT rather than straw grasping of how FAST Barry and Superman are going at it is confirmed Light Speed but Barry in the end had to go FASTER than light itself. the whole time argument is out of context for Barry knows nothing about time travel or even testing his limits past light speed. For all the Captain Marvel debaters that say Carol is moving beyond light speed in space means in battle she is MFTL+ should go check all the times she got tagged, hit and was easily feat-less in terms of battle speed than travel speed. Impressive travel speed but combat speed/reactions are poor for her only movie's villain's speed, power, durability, and strength weren't even at all powerful.

Even if you counter argue "why does superman and Barry not do this all the time or get hit" Well first off Barry is running in a singular circle that if you keep shooting in similar spot rotations without idk weave away then yes chances of you getting hit will be there. Superman is use to just tanking hits, melee attacks, and the like. Do you honestly think he will just always dodge and have to use his powers to their fullest? The whole point of Superman is to hold back for at any second he could kill someone if he is not careful but is willing to kill others if it means saving the lives of the many. He felt hostile in this movie, and was attacked but luckily some part of him was kept as shown when Lois comes in.

Next Barry has only tangled from what we know with Captain boomerang as shown in Suicide Squad, and done some parts with his powers, but he lacks pure combat and under pressure stakes that put him out of his comfort zone. For at least quicksilver had time to train, time to learn to use his powers with someone guiding him, but Barry from what we know of in context has nobody other than himself.

Barry's powers include on this level

phasing to an molecular level since the mother boxes were stated to manipulate matter itself so yes that Thanos snap of "I don't feel so good" begs a good question on if Barry can not simply avoid it. This includes the wall of the birthing chamber for how fast he was going to phase into and end up on the other side. Not saying he will use this too kill someone, but that does mean he can negate vision's tangibility form since he can vibrate/phase through objects.

FTL off the bat confirmed by the man, is able to go MFTL itself due to having to go beyond Light Speed. For no where does he say he will reverse time or think it is even possible. However we have to separate what we know of flash in the comics like the CW flash for both have different ways of reaching certain speeds to travel to other worlds etc. We know it is canon in the CW show and DCEU that the flash does end up going to other worlds. Regardless of which canon version of Snyder or Whedon you think fits it. It's not surprising no that DCEU flash will learn this in the future, but again hard to say.

He's one-shotting all the low to mid-teirs, but it's too many high tiers and hax to win so he's getting taken out with hax or combined attacks.

@gangorca: Then Supes is vaped.

@gangorca: He does actually. His body survived a nuke point blank range and that should’ve turned him into ionized mush. But his body actually held up against it.

But again, that doesn’t keep him from being turned into a Kryptonian French fry here.

I think not. Radiation (as we saw from the Nuke scene) negatively affects him due to it rapidly depleting his energy reserves in his cells. Godzilla’s breathe makes Nukes seem like firecrackers. Superman’s body would likely survive the actual force, but he’s being burned to a shriveled husk.

Aren’t there some anime characters that blink Lucifer?

Wooooooooow. You can TASTE the incoming salt filled tears in the air. MCU stans are about to have an aneurism trying to keep those mental gymnastics of denial going lol.

Drugs. It has to be drugs at this point.

@ultraphoenix: It just confirms that The Presence > All.

Lucifer and Michael would certainly scale beyond Perpetua now via feats and function.

They are the power and will of the Presence, his tools of creation, and were created to make and destroy worlds. They were imbued with that power and it’s innate to who and what they are. They ARE his aspects.

Perpetua needed to borrow energy from the Presence to create the original multiverse. She’s not the embodiment of any aspect of the Source. And the fact that Perpetua created a single multiverse with the energy borrowed, yet Michael’s power gave birth to three and Lucifer Will shaped one and created one from scratch, shows the power difference.