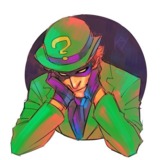 I really need to take better care of my house plants

Batman: The Court/City of Owls | Review

In my first review of Scott Snyder & Greg Capullo's acclaimed Batman run, I take a look at the first two volumes in their saga now regarded by many as a modern classic: A Court of Owls & The City of Owls. Now do bear in mind that I am by no means an actual reviewer (Is that a thing?) so this may be a bit choppy; and spoilers will be involved so turn away now if you still haven't read this.

Starting off on a high with Batman fighting his way through Arkham Asylum, we really get a feel for Snyder's Gotham straight away with the "Gotham Is" speech by Bruce. Only getting better from there on, I really started to see Gotham City as its own character - something I've never seen before or since and something I've only really appreciated on this reread; Gotham really has never felt this alive, or human, before and Snyder excels at describing the city through monologues and really exploring the history of Batman's home. We also get to see a lot of detective work throughout the story, which is one of my favourite aspects of Batman that is unfortunately often neglected. We also get plenty of action which (For the most part at least) is written well and feels believable (Well for comics anyway) as Batman fights against the Talons. The mystery of the Court of Owls is also played off really well, with not too much being shown that it ruins the appeal of the characters but just enough revealed to leave us wanting more. The comic actually gets pretty creepy at times with the whole mystery aspect of the Court which works brilliantly in favour for the story - whilst this whole creepiness is something we see often in Batman comics, seldom is it used so well, or as effective, as it is here. Basically the Court are just a really cool addition to the Batman mythos that fits in perfectly (Plus I love the rhyme).

My personal favourite moment from the entire story is the Labyrinth scene which is phenomenally written as we see Batman's descent into madness as even the pages are flipped upside down - we rarely ever see Bruce at his most vulnerable so seeing it here and handled so well is really brilliant. The whole Lincoln-March-subplot was very interesting as well, rather reminiscent of the Wrath character, with the Court manipulating Lincoln into believing he was Thomas Wayne Jr. Snyder works this really well into the story as if he had indeed turned out to be Bruce's brother then I feel like a lot of the story's intrigue would be lost for a simple "twist reveal"; luckily this wasn't the case and Thomas Wayne Jr. was revealed to have only survived one night (For some that wasn't definitive, but in my opinion the story of Thomas Wayne Jr. ended that night). However I do think that it would've worked better if it was truly confirmed that the Court had set up March to kill some of their members in order to throw Bruce off - maybe just as an extra page showing March meeting up with the Court again (Unbeknown to Bruce).

Originally I was a bit adverse to the reveal that Nightwing was intended to the next Talon and Bruce had adopted him just in time to prevent his fate as I felt like it was a bit of a stupid twist, but upon this reread I've greatly warmed to the idea as I love Bruce's thoughts on it:

You could never have been one of them. Never. They might have seen something in you, back then. But so did I. And the truth is, I didn't save you from some dark fate, those years ago. You saved me from one.

What is there really to say about Capullo's art that hasn't been said? Currently I'm not a massive fan of his recent work but his art here is just phenomenal. I mean, just look at the way he draws the Talons - it really is amazing. His artwork also really shines in the Labyrinth sequence with the Talon stalking Bruce and the different rooms within the Maze all look equally impressive. The way he has the Talon's glowing yellow eyes shine out of the darkness is, for lack of a better word, beautiful; the glowing eyes fit perfectly into the story Snyder is crafting with the mysterious and creepy themes used throughout the arc. My personal favourite shot through the whole story has to be with the Talon's glowing eyes shining as he sits in the Ambulance he just slaughtered two people in (Basically any panel with the Talons in are gold and I need to stop talking about their eyes). My only real complaint about the art is that in quite a few of the zoomed in panels it's pretty tricky to try and figure out what Capullo is trying to present. Also a few of the Arkham designs from the start are a bit...yeah let's just say I'm glad we never saw Riddler's Mohawk make a come back.

Honestly any problems I've mentioned previously are so minor they don't really bother me that much & don't put me off reading the story in any way. The Court of Owls was the first major Batman comic I'd ever read and I still had it in its original protective wrapping until this reread so it means a lot to me. Without it, I very much doubt I'd have continued to read comics and I almost certainly would never have come to Comic Vine. As it holds a special place in my heart it was really great to give the story another re-read as I hadn't read it in a while.