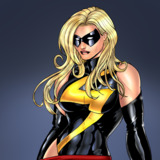 How Powers were Acquired:

Hybrid* Energy Manipulation- Ms. Might can control energy (unknown origin) as a weapon and blast it from her body.

Hybrid* 'Telekinesis'- Ms. Might can use the energy she controls and infuse it into objects/items and move them around as she wills.

Matter Empowerment- Ms. Might empowers matter with energy allowing it to hit with a much larger force than it would have un-empowered.

Super Strength- Ms. Might has enhanced strength, allowing her to pick up things that weigh up to 25 tons

Enhanced Durability- Ms. Might can take hits of over 10 tons and not be in any critical condition.

Super-Jump- Ms. Might has the power to jump up to 30 feet into the air.

You might've heard of me. If you're law enforcement, this probably isn't the first time, and if you're A.I.M, it most surely is your last. For those who don't fall under either category, I'm Ms. Might.

I was born on the 5th of may, 1991 in Montréal, QC to a low-end middle class family. My parents didn't have big jobs, and money was always running short, but as a single child, my parents wanted me to have a bright future, one filled with opportunity, and so they signed me up for hockey at the age of 5. They were always there, getting up early in the morning, bringing me to practices, paying for the equipment and club fees... little did they know, their efforts would be in vain. How I wish I would’ve been more appreciative, more grateful for what they did… If only I could go back to that dreadful day and thank them one last time.... Tell them I love them...

My last normal day was the 21st of december, 2005. Christmas in 4 days. Day of the Eagles’ first semi-final game, ever. The atmosphere was crazy. I skated onto the ice and was met with a roar of applause. I don’t mean to brag, but I WAS an amazing player. With just 2 minutes into the game, when all eyes were on the ice, ready for a grand finale, the world exploded. The ceiling came crashing down, and then we were met with a blinding light, and suddenly, everything vanished.

The rubble from the roof, gone. The crowd, gone. Even the stadium was down to its roots, and if I had stood up at that moment, I would’ve probably seen beyond. Why I was alive? I didn’t know, nor did I have time to think about it. I wasn’t alone in the arena, contrary to my previous beliefs. 3 men dressed in yellow behive suits were walking through the now free-of-ice rink, and completely visible and without cover, they quickly came over to me and i was dragged back to a van.

I was taken into an underground basement, where the men studied me. Now, back to that previous quesiton on why I was alive? It seemed they were also eager to know what had happened. They stuck me on steel tables and injected long, thick needles into my head, limbs and body, and they discovered that the ‘bomb’ had genetically modified my DNA, and that I was some sort of ‘superhuman’ now.

And then the testing started- they wanted to see to what limits I could go. I was beaten to near-death see how durable I was, to the point of seeing muscle and bone. I was mutilated, to see how well my body regenerated. I was placed into pits against mutated beasts and chimeras, and I had to hold on dearly to my life. I was thrown off places dozens of feet into the air to see if I could survive. I would curse the time of my birth by day, and pray for death by night. I was fed like a dog, with scraps that barely kept me alive, and I lost a lot of weight. A LOT. Only a few weeks in, I had already lost over half of my body weight, or thats what it seemed like anyways, and my ribs did not look to be covered by any skin. This was what I lived through for 6 years.

My day of liberation finally came after my daily trashing. That was also the day I started believing in miracles. The scientists had forgotten to lock my door. Completely exhausted and finished, it was a miracle that I could still stand on two feet. I left the room, and went through a labyrinth of hallways, when I eventually came upon the scientists. I…

I tore them to shreds.

Coming out of 6 years of captivity wasn’t easy, and much less without any relatives. I was forced to live off the streets at the age of 20. Although now, with my superpowers, surely, I had a future.

I became a vigilante, killing criminals for their gains but I never went against people of the law, even though I quickly became very reknown to them, and was often times charged with homocide and posession of stolen money. This is what I did for the following years, when I stumbled on a A.I.M warehouse. I’m not proud of what I did next, but if the time came again, I would probably still do it. I knew that if I was caught, I was gonna be in huge trouble with the police, so I decided to move to America, where I wouldn’t be recognized as much and I could hopefully carry on with my activities quietly.

(In the process of re-doing it)