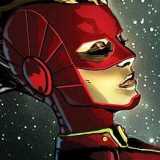 A 19 year old (gah! almost the dreaded two decades!) girl who has been obsessed with Comic Books and Graphic Novels since before I can remember...... about 10 years or so. Reads Marvel and DC religiously, as well as the odd Vertigo/ Image title.

The following is my "Super-Bio", moved here due to formatting issues. Note: This is not the character I'll be using in RPG's (I've yet to make one up); merely one that got too out of hand, and became this behemoth.

Aliases: The Forgotten One, The Lost Princess, Alexis.

Identity: An alien heralding from the planet Almerac, and member of the House of the Blood Royale. She was exiled by Maxima, who is believed to be her older sister, for rebelling against the Almeracian culture of violence and domination through battle. Maxima ordered all records of Alexia to be removed from the archives, and refused to acknowledge her very existence. Those who dared to remember her referred to her as "The Forgotten One". After Almerac's destruction, Alexia is one of the few remaining Almeracians, having sought out Earth after Maxima had mentioned it in passing; believing it to be her only hope of sanctuary.

Religion: She shares the religion of her fellow Almeracians; and holds the "Divine Matron" in great stead. Her subsequent exile means that she has since adopted, at least partially, the beliefs of her adopted planet, Earth; finding many of their religions to be (at the very least) interesting.

Personality: Alexia is kind-heated, and holds the belief that violence is not always the answer. She is tactful, almost empathic, and tries hard to avoid hurting others unnecessarily. She holds almost a resentment for her powers, believing them to be the result of blood and countless deaths- which has led to her being cautious and careful; never taking hasty actions. However, despite Alexia's exhaustive efforts, she is still an Almeracian at heart (no doubt due to her family's history). As such, she has displayed an indomitable will, and a fiery temper - yet innate courage and, above all, unending loyalty for anyone she is willing to call "friend".

Height: As much as she wished to abandon all ties to Almerac and her "previous life", Alexia's height- the result of generations of selective breeding- remains perhaps her most distinguishing feature. Due to her Almeracian physiology, she is unable to have tattoos or piercings of any kind.

Alexia was born in the utopian capitol, Tae Tamrac; under the watchful presence of the "Divine Matron". As a result of being born into the Almeracian Royal Family- a member of the Blood Royale- Alexia was granted the reward of selective breeding and gene therapy; super-human powers, similar to those possessed by her sister Maxima. From an early age she was taught in the art of battle, and strategy, befitting the highly regarded beliefs of Almeracian culture. As the younger sister to the Queen, she was raised to be proficient in the areas of politics and leadership should her sister perish before an adequate mate could be found. However, Alexia soon grew to resent the mass killings and conquests that her people took part in, all in the never-ending search for the "perfect" genetic stock. She voiced these resentments to Maxima, who responded with first confusion, then anger.The situation soon descended into an incredibly heated argument, where, in a fury, Maxima vowed to cast Alexia out, removing her from the histories. She wasn't bluffing. In a moment of anger, Alexia was exiled, destined to be "The Lost Princess".

Over the many years since her exile, and seeing the good that Maxima had managed to accomplish under the tutelage of the Justice League, Alexia had come to sympathize with her sister's position, and has long since forgiven her for her actions.Upon hearing the rumour of Maxima's heroic demise, Alexia sunk into a mild depression, painfully aware that she hadn't had a chance to reconcile with her sister.

Recent/Current Events: Upon her arrival on Earth (having been aided by a loyal Sh'kirry, the Captain of Maxima's personal guard) Alexia managed to keep a reasonably low profile, despite being dressed in Almeracian garments. She later discovered that she had arrived on the outskirts of London, in the UK. (to be continued/amended)

Powers/Abilities: As an Almeracian of Royal descent, Alexia possesses the following powers.

Super- Strength: Although not as developed as Maxima's, due in part through lack of use/training, Alexia is able to lift around 80 tons with minimal/some effort. If warranted, her psionic powers can augment her strength to allow her to lift around 100 tons.

Super-Speed: Alexia can run at speeds of, or exceeding that, of Mach 3. And has, on occasion, traveled at speeds nearing those that possess the speed-force. Whilst flying she can reach Hyper-sonic speeds.

Teleportation: Alexia has shown the power of teleportation to travel short distances. (Around 10 miles or so).

Force field Projection: Alexia is able to create forcefields for herself or others that allow her to travel into the vacuum of space, or deep below the ocean. She has so far been unable to test the strength of such constructs when up against super-human opponents.

Matter Manipulation/Ferrokinesis/Telekinesis: Alexia has managed to hone her telekinetic ability to near mastery, allowing for precise manipulation of particles and atoms. This ability allows her to manipulate both organic and inorganic materials; and is perhaps her most trained/deadly power- able to move entire buildings, or tectonic plates (much like her sister) to single atoms. Alexia knows, that if she had the will to, she could disintegrate (and rebuild) any object with just a thought.

Optical Force Beams/Heat Vision: Alexia has the power to control the power of her optic force beams to equal that of searing heat vision.

Invulnerability: Due to her Almeracian physiology, Alexia is almost entirely impervious to physical injury; being bullet-proof, and immune to disease or poisons. This ability is akin to that of a Kryptonian. Again, she can use her psionic powers to bolster her strength and constitution.

Flight: Alexia can fly at super-sonic speeds, and even into the depths of space (although she has never utilized this ability)

Mind-Bolts: All Almeracians have this ability, which has become a dreaded symbol of Almeracian domination.

Lesser Powers/Untrained: Desiring a "normal" life there are some powers that Alexia has not explored in any/ much capacity. The following are based on the powers that Maxima possesses.

Genius- Level Intellect: A by-product of selective breeding, Alexia has an eidetic memory, and a talent for strategy, puzzles and logic. She also has in-depth knowledge of the advanced alien Almeracian culture, far beyond that of Human understanding.

Armed/Unarmed Combat: The result of her Almeracian upbringing, she has a mastery in combat and the art of war.