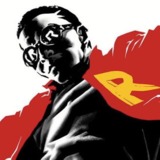 @dernman: Well you should read more, unless you don't want to be proven wrong.

@dernman: You realize how dumb you are right?

Let's assume she is born bi-sexual, because like you said "You are what you are". Wonder Woman was raised by women who DETEST men in every way. When they speak of them they speak down on them. So, naturally, Diana would believe these same things as it is all she knows. Especially since she's NEVER seen a man before. This means, that her bi-sexuality would only present itself when she's introduced to men. That's exactly what happens in Grant Morrison's Wonder Woman: Earth One.

You sound like you're trying to be progressive, but you're just going backwards.

Logically, it makes more sense that the Amazonians are lesbian. You mean to tell me they've gone thousands of years without any sexual stimulation. And maybe it's purely a sex thing, as they see themselves as sisters.

You said, "You ever think part of the reason she wanted to get away from the island so bad is because there were no options of sexual attraction for her there?" You realize the last time the Amazons had interactions with man they were being raped and put in bondage by them, right? I don't think Wonder Woman's looking for sexual activity with men. She might find that she's interested in it when Trevor comes to the island, but that's not something she'd realistically pursue. How could she say to herself "I like men not women" if she had never met a man in her life, had been taught to hate men, never expected to ever meet a man, and is surrounded by women who were once sexually abused by men.

Your argument makes no sense.

I fly over the heads of the countless cops below me, going unnoticed by everyone other than my four…ex-classmates, who go unnoticed as well. With the help of Ariana’s invisibility and Adri’s flight, all five of us float up to the roof of the large bank in downtown Indigo. Why would we do such a thing? No we’re not robbing a bank. We’re trying to stop the bank robber, but not some low rate guy with a mask and a shotgun. This is the Reverend Doctor Dentist, and we were tricked in to stopping him by “Database”. A lot to swallow at once right? Well I’m still chewing.

We descend on to the roof of the bank and immediately are once again visible to the naked eye. Ariana hunches over, hands on her knees, as she gasps for air. That obviously tired her. I don’t think she’s ever have to make two people invisible at one time, let alone five. Adri is clearly tired too, only having to lift herself in the past. Samuel said they could lift us all because our TKF’s (Telekinetic Fields) are very strong and easy to latch on to. Good thing we won’t need them much anymore, them having the least offensive skill set on the team.

“Good job girls, but we’re not done,” Samuel says as he approaches the skylight a couple feet away from where we stand, “Let’s keep moving.”

Samuel extends his left hand towards the skylight. The windows begin to float out of place as the window panes bend to the sides, making a clear enough space for us to enter the bank. I see the Reverend down there, preaching his idiotic gospel to his hostages.

“Wait if we go in there won’t is set off a bunch of alarms and stuff?” Gunner asks.

“The Reverend’s already set off all the alarms. No one outside will know that we’re in there.” I answer.

“And we wanna keep it that way. Do you guys remember the plan in full?” Samuel asks one last time.

“I hope so.” Ariana mutters under her breath.

“Alright,” Samuel turns his back towards us, preparing his descent in to the war-zone. “Let’s do this!”

I send out a wave of TK energy sending the bits in all different directions. I then realize that my actions could’ve seriously hurt some of the hostages, but it didn’t so who cares. It did nail some of the Reverend’s blind follower’s though. They deserved it.

“YOU WILL KNEEL BEFORE THE REVEREND DOCTOR DENTIST AND YOUR TEETH SHALL BE PULLED FROM THY GUMS!!!!!” the Reverend screams as he wrestles around with Blake.

“Jesus will ya STOP YELLING,” I say as a TK Blast some Reverend Henchmen in to the wall, “Might as well be drilling out my ear-drums.”

“That includes you!” I retort.

I’m suddenly knocked to my knees, an attack from behind. Before I can counter, a blow to the head sends my face down in to the floor. I feel a rapid breeze of air, indicating that something is coming down on top of me. I brace for impact, but I’m never hit. I look over to see that Samuel saved me form getting beat by a henchman with a club. Man what an embarrassing way to go out.

We run over to the grueling duel between the Reverend and Blake. Both have bruises. The Reverend’s about to get some more.

“What’re you gonna do? We have you surrounded!” I ask the Reverend.

“YOU THINK STANDING AROUND ME GIVES YOU THE UPPERHAND?!?!?!? HAHAHAHAHAHA!!!!! YOU ARE MISTAKEN!!!!”

Immediately after, the Reverend Doctor Dentist launches for Gunner. Gunner blasts him to the ground, mid-air. The Reverend tumbles backwards and jumps back to his feet. Before he can even regain his footing, Blake runs up and decks him in the stomach, sending the Reverend back 10 feet in to the wall. The Reverend plops down on to the floor, his giant drill unclipping from his utility belt.

“GIVE IT BAAAAAACCCCCKKKKKKKKK!!!!!!!!!” He yells as he stands to his feet and begins to sprint towards me. I run in the opposite direction as the Reverend jumps in to the air and begins his teleportation process. Before he can fully teleport, Blake tackles him in the air. They both go crashing down to the floor.

Blake rolls over from on top of the reverend so that the Reverend faces towards Gunner who’s been charging up an incredible TK blast, Phoenix Sphere X style. Blake throws the Reverend in to the air and Blake sends a huge wave of TK energy at the Reverend. He is forced back in to the wall, leaving a Reverend Doctor Dentist shaped dent in it. The Reverend drops down, now unconscious.

“OPEN THE DOOR REVEREND! WE ARE ABOUT TO COME IN,” We hear someone shout from outside the door, “WE HAVE A BATTERING RAM!”

“Adri! Ariana!” I shout up to the ceiling. Before we know it Adri and Ariana drop down in to the bank. We turn invisible and fly up through the sky light.

However, it doesn’t look like we’re going to get away with a clean escape this time. How so? Because a large group of CBTF Officers stand with their guns pointed directly at us. I wish Ariana would've kept us invisible a little longer.

I'm going to write a mini about Hal Jordan's quest for Parallax. You wanna get tagged?

Great issue, but I can't believe that this city only had 56 people. That's an incredibly small amount of people.

This is most DEFINITELY the best chapter. It blew me away. Some of the dialog and even the narration was just great! Despite some typos, this was great. And now I really wanna explore what happened with John and Guy PRE Sinestro coming through, but I don't think I could take on three titles. Maaayyyyybbbbbeeee a one-shot though that leads into the last scene of Sinestro #4.

Nice! You should go back and spell-check this though, and it's StewarT not StewarD.