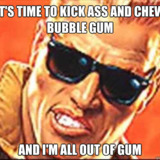 @realitywarper: opm is easily the best anime this year

Actually, i'm a BIG fan of both characters.

The writers and artists are really at the top for both series and that's really really enjoyable ! :D

The concept of Saitama is really fun and even nobody can be a combat beast like him I really have a crush in Saitama's personality,andin Kenshiro's personality too as he is one guy whom wants to live peacefully with his beloved one even he is the master of some overhaxxed martial arts.

So i know that Ken has some good hax on his side.

That's what is cool about the Muso Tensei, you always bet about which technique Kenshiro will use to be victorious.

Also, Saitama usually starts a fight being pretty confident and tanking hits, and that could be his demise.

I honestly that he will not find a worthy opponent before the true end of the serie and that will be a guy like him whom has broke his limiter.

They will end the serie has friends, I'm pretty sure about it.

I hope so too. It's good to see you back. There's was no other Sentry expert around :)

Thanks but it's really tyring to defend The Sentry. No matter how much evidence you want to share, people will always interpretate stuff the way they want and ignore the part they don't want to follow.

Ironically I got some interest in The Sentry when I wanted to be truly involved in debates into the Vine : I wanted to have knowledge about a not-well-known character and to understand the way he was written and designed.

I guess that the unpopularity of a character is more or less reflected on people whom want to make a case for him.

I regret nothing about this, it was really good for me to discover the character, his strengths and flaws, his place in the Marvel Universe.

I think that Marvel could write good stories with him even he deserves a very good writer.

@realitywarper: You are back, whoa.

And yes, Kenshiro should win here. Muso Tensei is a pretty broken technique, and Saitama's durability doesn't really matter when Kenshiro is gonna make him explode from inside.

I never expected you to agree with me escpecially on that case.

By the way I truly believed I was permabanned.

I hope that the debates will be more "coooool" now.

Saitama is OP but didn't show ANY technique to counter the Muso Tensei which is a state of being with no time limit.

He didn't showed any technique supposed to counter being hit to the pressure-points as the durability doesn't matter at all : the point of the pp-techniques is to disrupt the Chi flow so the body destroys himself.

I advise everybody to read both series.

Saitama if you like OP heroes in a no-serious serie which parody the existing Shonen. I truly like Saitama and Genos.

Hokuto No Ken if you praticed Martial Arts and are aware of the legends around this. The characters and stories are truly interesting. Kenshiro is a well defined character.

Team 1 is too powerful.

The only way to kill DS is to kill his eternal atom which an hard task as Uriel throwing billions (?) of nuclear attack-level per second was unable to kill him.

I don't know much about STTGL but I guess that he has a LOT of RAW power.

At worst DS can resurrect the STTGL crew easily.

If she can just destroy Zatanna, she can destroy the Universe Zatanna is in and recreate it without her.

That's not against the rules give by the OP.

show me the feats which you are referring as 1) reality warping, 2) time manipulation, 3) energy manipulation

I don't know why I'm wasting time with you aswell.

I would have better to teach to a dog how to speak.

very impolite behavior.. even though i have not lost my cool against you...... this actually changed my view of you you know... i see, you don't know the meaning of being friendly (yes we were friendly for a long time on vine) even after a heated debate... just see..... just because i'm not agreeing with you.. and debating against you... u're calling me with 'bozo'.. comparing me with 'dog'? ... was that how much disrespect present between you and me?.... i really didn't expected this.

All of your posts were aggressive, disrespectful and borderline trolling.

let me come in here once again.. and put it in a very simple manner where you can understand it

educating to properly translate a context

Nate Grey came back to Earth with NO idea of what happened in here while he was "dead". Sentry wiped the memories of everyone when Nate was in another Universe.

yes.. yet nate remembered sentry (either sentry's mind wipe wasn't even applied to him.. or it didn't affected him..... i know of course you'd choose the former one.. though there's no time indication in the actions ;))

Osborn isn't fully aware of Sentry's powers and thinked that Nate could go toe-to-toe with him... A thing that Nate rebuted later.

what nope?... a team was sent to deal with nate.. along with sentry being in the team.

Yep. And Nate recongnized that Sentry is more powerful than him.

It wasn't on purpose and you are taking only the things that suits your opinion here.

what nate recognized, was that he needs to take out sentry from the team and deal with them.. that's exactly what he did.. by saying sentry would beat his a$$ (playing coy).. and make a confused fool out of him

Nate refers to his whole tirade when he said that he told Sentry the truth. It was an excellent plot for the writer to continue the story with Nate as Sentry would have kicked his psionic butt hard.

the truth = nate knew about sentry, he did not forget.................... not sentry would kick his butt... why the hell would a guy even say such a thing to another guy who came to stop him (potential fight), unless he wants to coy him (though who doesn't know the meaning of playing coy would not understand)?

Nate stated that Ares is a God and that he has no way to beat him, even the time manipulation didn't work and that's right Sentry destroyed Ares easily.

yes.. coming from a guy who can crush him with planetary+ telekinesis.. atomize him with near cosmic level psionic powers... or can even dump him outside of reality.... i see no plausible reason for nate to say that in a battle.. unless he wanted to coy ares too like he did to sentry.

for the comparison part

i have no doubt in that.. but nate is not a physical fighter to begin with...

Telepathycally ? Nate get wrecked and controlled.

I like people whom pretend that they knows more than the writers, authors, or the creator of the character himself.

this is the ONLY line.... around which your debates revolves....... statements and hyperboles..... let me be clear of one thing....... we don't know more than the writer..... but we can read the comics.. and see them with our own eyes ... writer saying something, doesn't make the feat appear in the stories

writer statement =/= feats in the comics

so unless you have feats of sentry having reality warping, time manipulation or resistance, energy manip..... or having a tp even close to nate.... SHUT THE F*CK UP AND STOP WASTING MY TIME WITH STATEMENTS AND HYPERBOLES.... SENTRY GETS FROZEN IN TIME, OR MIND CONTROLLED

haha... all that desperate craps... and still not 1 direct feat.. just trying to go on and on with statements and hyperboles... XD

and still not a single way to put this version of nate down... XD

You are a true gentleman really. For the questions you are trolling about they were already adressed before. You are the only one making that debate an Ersatz.

The Phoenix is still lacking actual feats though. The IG defeated Eternity, and even the Living Tribunal stated it would be a huge fight if he were to battle it with a willful user.

I don't believe the Phoenix is on that level of power. The Phoenix has more hype than feats.

I tend to side with Lordofallhumans on this one.

The rest of the story is up to the writers.