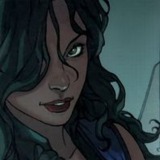 Making room for a non-princess

Rumours have been swirling recently that `most beautiful person alive` Lupita Nyongo might be joining the cast of the next Star Wars movies. While this has yet to be decided absolutely in one way or another, a bit of extra movie news has been given to us in the past few weeks about actual signings, one including Daisy Ridley. Nothing has been revealed as of yet about the character, and the actress`s experience is not much to judge off of either:

What is striking about the character, at least from the above picture is just how much she looks like Natalie Portman, not as in a twin, but reasonable to assume that one was the grandmother of the other. In the realm of the new movies though it would be nice to see a departure from this line of female portrayal. While in the 1970s a spacefaring princess who doubled as an espionage agent, rebel and saboteur was a pretty advanced role for a female character, it is not so much anymore. Instead the princess aspect of such a character can easily be lost, and to just make the character into an espionage agent, rebel and saboteur in her own right. That she looks a lot like she could be the next branch in a family tree of the Jedi clan is obvious, but maybe it is time for the Star Wars universe to get a little more modern in its portrayal of female characters and to lose the princess title.

I'd be okay if she was a Princess as in a Robot Princess or Droid Princess or something more grand and unique, like Princess of the Dead Sith. Also when Keira Knightly and Natalie Portman wear Queen Amidala face paint. Sorry random thoughts. Are you particularly excited about the upcoming movies?

That's kind of part of my point.

never heard of her and she doesn't look that attractive o.o

I don't think they're planning on making here a princess, since..she isn't really princess of anything.