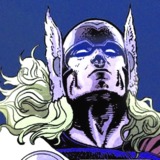 I still think Namor bringing the sun down to his people is underrated. Causing vibranium to undergo nuclear fusion is top tier

Creating a sun is godly indeed!!! I think there is a cave painting of him creating the sun too.. but I’m having trouble finding it.. I think I have saved to my computer.

But what do you think.. cave paintings his canon history?

Yes because those are his history

Thank you for calling my sneakiness clever, but what part of "I support the retcon" did you not understand?

All of the arguments you've just endorsed exist in isolation, even if I concede that they were valid at one point in time - they wouldn't be valid no longer. Acting like I'm a troll because I actually took steps to address these pre-retcon arguments is quite frankly insulting. I took a glance at your post and you're suggesting stuff like "Beast implies Wanda maybe affected the omniverse" = omnipotence lol. It is not worth talking to you if you are taking me as a troll and I am taking you seriously.

Thusly I'm not bothering with your goofy any longer, it's clear now that you are deflecting to tangents that only exist in the absence of pretty much everything I said to begin with. I'll leave you with the fact that Thor himself was compared to HoM Wanda when the Avengers were playing the blame game to deflect from your queen's sins!

I still think Namor bringing the sun down to his people is underrated. Causing vibranium to undergo nuclear fusion is top tier

Always strange how we define power by taking singular actions instead of across the board performance.

Nay I am too noble to do that. I respect Wanda, and do this due to two things, a dramatic change in state and power for this isolated instance and an opportunity to expand on the lore behind how that works.

No one in their right mind thinks HoM was retconned to planetary btw. Even non-Wanda fans would laugh at the notion.

All of Rajs posts are bait anyways lmao. Its better to say that no one in their right mind would take his statements to be objective without further research etc.

Yea. The cope these people reach nowadays to lowball Wanda shows their desperation and obsession. HOM Wanda will always be multiversal+.

Weakened Wanda /= Regular Wanda. If you really want to go this way, the Phionex whopped Thor's ass who Wanda effortlessly beat up. DQ was also confirmed to be much more powerful than both Jane and Thor, with another writer admitting Wanda could beat DQ. The scaling and feats is already above this dudes.

Look, for example, if I kick you in the balls and then stab you, every spectator would say "He stabbed him!", and it doesn't mean I didn't kick you before, it's just that the more important part was emphasised.

Similarly, this part only emphasises that she altered the 616 Earth, which was the main plot point of House of M, and the most important part in the grand scheme of things. No one cares if some random universe got warped by the spell, because we almost exclusively care about 616 (same how your balls hurting is insignificant to being stabbed to death).

Nowhere does it state it didn't go beyond the 616 Earth or the universe, and considering we already have plenty, and I mean plenty of evidence it did go beyond Earth and the universe, your gaslighting isn't really gonna bear fruit for anyone with semi-decent knowledge in this:

I'll group these arguments - on the topic of bait, don't act like either of you can resist it. I know you can't.

You, BigBaby, Wanda did not effortlessly beat up the Phoenix Raptor, this is Wandarer fanfiction - Thor actually knocked it out (writer confirmed!) with one throw of his hammer, and it had to feed on another world to take him. If you are talking about hosts, all her feats had special circumstances, as Tony analyzed the energies the fights and observed that the data splits in half and spikes - he observed Phoenix/Wanda powers are connected to each other and both accelerate when they clash. Wanda is not weakened, this was never about her injuries, but about the power she was wielding. DQ couldn't be that powerful if she had to blackmail Thor into playing nice by deceit aka threatening to not save his family and friends.

Moving on to the peanut gallery...

Sora, there's nothing for me to gaslight when you follow the path of a run-of-the-mill powerscaler; your evidence is not worth anything and there is no cunning or skill in your arguments.

Your first set of scans refers to worlds and dimensions within reality - these are not universes, you can literally see planets in an extra-dimensional space. Your second set of scans refers to alternate timelines. While these are universes, this is useless evidence because all of the timelines Forge searched after M-Day were futures. Meaning when Wanda did her thing in the main reality, those timelines would still have that event in their past, and the consequences of that event would apply as well. So "No More Mutants" would have been relevant in any of those futures no matter how powerful she was. Maybe if you bothered reading your own evidence, you could have avoided this error. But then again, if Wandarers knew how to read, how could they have made a fake version of the character?

That said, neither of you have the ability to successfully debate against the retcon. Don't use the fallacy of false analogy just because you don't know what a word means. There is no emphasis - there is hidden extra information - also, if it is hidden, how do you know it exists? Are you speculating?

Worldwide indicates that the extent of her effect (how wide something is) ranged across the Earth (world). Maybe you can use Wanda's translation spells to understand the definition of words, but I still know more about Wanda's lore and powerset than both of you combined. This whole retcon debate is proof of that. It was a literal offhand one-liner and y'all made it all about the tangent. Talk about obsessed lol.

Also there's no need to belabor your obsession with balls - it's rather inappropriate and Wandarers are known to be gelded from birth anyway.

No one in their right mind thinks HoM was retconned to planetary btw. Even non-Wanda fans would laugh at the notion.

This is what we call gatekeeping, folks! Wandarers can't read, so they pretend others can't as well!

Wanda was at her weakest as she was still healing from being literally stabbed through her stomach. HoM was also never retconned in the way you’re saying.

The woman in her normal state can weave bubble reailties, bend and fold dimensions like paper. Her throwing him into space with some lava wasn’t her full strength at all.

It's commonly accepted by anyone else but Wanda fans that HoM was retconned to planetary. It's also accepted now that since they've been outed for using fake amps, they are not authorities on anything. Trying to ignore that despite the evidence explicitly saying the warp was a worldwide one doesn't work.

Lol you flat out ignored everything written on the page. And all of the witchcraft notation around Wanda and in the blast. Reducing it to "throwing Thor with lava" is outright false. She's the Avatar of Chaos, respect her!

@rajjarsalt: Any other version that doesn't have a stab wound...

No, you said that there were specific versions who are >= the version here, AND that they were not injured. They're independent points.

there are other versions of Wanda that are equal and or stronger than the one that fought Thor , and that don't have a stab wound.

@rajjarsalt: blah blah blah a whole lot of nothing was just typed

Ah yes the writer of the Darkhold arc = nothing