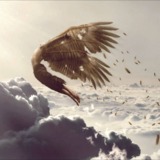 Interesting article, even if it was written over half a decade ago.

I don't really see how the current range of DC books are aimed at kids at all. The violence can be quite confronting. Batman in particular often has quite graphic violence and gore that I personally find a little tiring (and I'm no prude).

The DC Animated Movies are also surprisingly violent, and I bet more young people are watching those.

So yeah, I think they're too violent and it often isn't necessary.

This has always been a problem. There's no way you can just put on a pair of glasses and suddenly fool people. I guess everyone knows this.

It actually doesn't seem as unlikely in the books - it's passable at least and I can roll with it. But once you show a live action movie the whole concept of Superman undercover suddenly becomes preposterous.

A regular fight just won't happen. I don't see how it could happen.

My guess is that there might be some initial aggression based around a misunderstanding (like so much comic book violence) but that they won't actually trade blows.

You can punch Manhattan, as Guy Gardiner showed in Issue 9 (I think), but he doesn't stay punched. There's little point in a real fight.

Personally I'd prefer to see some good dialogue between the two.

Some of them had a bad start but fixed themselves after that like: Nightwing, Mister Miracle, Doomsday Clock and Aquaman.

Good to hear that Aquaman is making improvements. I gave up on it after... gee I don't know, maybe a dozen issues due to the boring government/politics nonsense that just went on and on.

You're right about Doomsday Clock too, especially across the last few issues (8, 9, and 10) which are really starting to provide some answers and make things interesting. The first few issues were damn confusing, and of course the infamous slow release time has only made the confusion worse.

I stuck with Batman for over 40 issues but had to give that up too. Boring boring boring. Who cares about the Catwoman relationship? Not me.

As for the hope and optimism, I can say I've seen much of that from my readings of Aquaman, Batman and Doomsday Clock. I'm taking a chance with Hal Jordan now because I really like Robert Venditti, so I'm going to start from Vol 1 TPB and see how I go. Surely space adventures can't be ruined by politics and relationships, right?

There are some good calls here about how long this is taking. And of course Issue 11 is still not released, but apparently in September it will be?!

I wrote in detail about my feelings of Doomsday Clock in the Doomsday Clock thread in this forum. (I sort of wish all of these threads were created in the DC Forum so that they're easier to keep track of. Here they disappear within hours of being posted due to the huge number of postings to the Gen Discussion forum.) Why don't people use the DC forum!!?

I literally have to read the previous issues everytime a new one releases.

THIS... THIS SO FREAKING HARD!!!! I feel like im studying for a test at this point

You've nailed it. It's so hard to keep up with events that were written three years ago that have relevance to what's happening now and your 'studying for a test' analogy is apt. hahaha.

I think it's been a bad move by DC to have so many delays. Obviously they didn't intend for them, but this was such an important event - the most important in the current DC Universe - that they needed to keep the momentum and generate some talk around it. The only talk that really happens now is about how notoriously delayed the whole thing has been.

This has been one strange series, that's for sure.

I was super-hyped back in... wait... May 2016?! when it started with DC Universe Rebirth 1, but by about Issue 6 of the actual series I really started to lose momentum with such significant delays between issues. It was just too long between issues to live in the moment with the storyline, and the storylines were so complicated that I had to keep looking back at past issues to figure out what was going on.

There were so many characters, old and new, to keep track of, it was kind of exhausting even with only a few issues per year. The storytelling style - presumably to cater for the sheer number of characters - was also quite choppy in relation to scenes, characters and plotlines. A couple of panels here, boom, now a couple of panels there with someone else, boom, now off we go again.

Another complaint I have is that it seemed to take forever to actually start explaining the whole question of the rebirth that was raised so well in the original DC Universe Rebirth 1. I was expecting more of that but had to wait literally years before it seemed to give some pay-off.

Anyway, I have to say that I really loved Issue 10, and it's by far my favourite issue of the series. Finally we're getting some rock-solid explanation of how the New 52 was started and influenced, as well as the stunning timeline change references in relation to Superman. Geoff Johns at his best. It just took so long getting there.

I'm now excited again for the final two issues. Regarding the Superman/Manhattan fight, I personally don't see any definitive outcome or winner. It would be foolish to have Superman defeat Manhattan given Jon's powers. My guess is that Dr Manhattan will vanish himself to some distant part of the universe or another universe to live in solitude (until he's next needed by a DC storyline).

I really hope we get some good pay-off though. It will probably be about 3.5-4 years from the original DC Universe Rebirth 1 to the release of Issue 12, which is just ridiculous when you think about it, and really unforgivable by DC. Talk about lost momentum... So I want some clear answers and not more obfuscation and uncertainty.

Issue 10 was a very good omen. I think the whole package is going to turn out really good. Trust in Johns.

I wish there was more detective work and slow burn whodunnit style narratives in Batman books. I’ve always found this a frustration. It’s why stories like The Long Halloween are so special. It might not be perfect but at least it’s a detective story. It’s great.

If people didn’t go on about the detective element I wouldn’t have even realised he was supposed to be one in the last seven years or so.

@assassinb: You really don’t mince words, do you.

I will agree that there really aren’t any mysteries to solve by this so called detective, and the days of Loeb writing killer mysteries seems over (for now).

But I stand by my claim that the King books have a cool tone and vibe to them. I think the dialogue is pretty good, perhaps apart from the “Cat”/“Bat” bollocks that is a bit cringey.

The Batman books of the Snyder/King era have relatively little dialogue in them anyway compared with Aquaman and Wonder Woman etc where the storylines are more plot driven and less philosophical like Batman. I do like the dialogue for the most part.

It amuses me how ravenously angry Batman fans get about Batman writers. It wasn’t that long ago that everyone was going nuts about how bad Snyder was. I even dropped the book halfway through his run, so I was fully on board that criticism. I just think King is more readable.

Can anyone explain how does Bruce punch Barry in the face.

Either King is ridiculing other heroes or he is the biggest Batwanker ever.

I doubt the latter, since he made Bruce lose to Talia whereas his precious "Cat"stomped her.

I'm seeing a lot of hate poured onto King lately and I feel compelled to stand up for the guy.

Regarding #41, I thought it was brilliant. Firstly, the artwork involving Ivy was just stunning and those big splash pages were to die for. So on that front the book is fantastic.

But we're talking about Tom King. I thought the writing was really good too. The idea that Batman is the only one in the issue who can fight Ivy's power, making it down to the Batcave to inject the antidote was a good move, and having him knock out Barry Allen was brilliant and unexpected. As @enzo991 has pointed out, this was most likely Ivy's defense mechanism to protect Alfred. Why Bruce thought that punching Alfred in the face would be a good move, though... well, who knows. Presumably to severe the link Ivy had with Wayne Manor.

I just really like the tone and slower pace of King's writing. One thing that jumps out at me, though, is that there is quite a chasm between issues sometimes. #40 saw Bruce and Diana fighting the horde for the equivalent of 37 years while The Gentle Man sees his wife - 37 years! Then in #41 it's back to life as usual. It seems like a pretty significant event to sweep under the carpet. Also, as if he wouldn't have boned Diana in that time. Come on! I would have been hitting on her after three minutes.

But overall I have to say that I'm enjoying King's run, and as I mentioned in another thread, it's a significant improvement on Scott Snyder's Harper Row and Duke stories (remember those!?!).