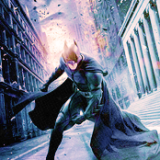 Contrary to popular belief, storytelling in comics and graphic novels, particularly in the Marvel Universe, do not need to have consistent action. A well-planned and executed conversation can create a gripping dynamic that explosions and attractive artwork would never hope to do. Sure, it isn’t appealing to younger readers, who prefer more sizzle than meat, but, optimistically, I would like to believe the audiences of particular characters are on the later teens and early 20s spectrum. A charact...

Welcome to the Web 0

Spider-Island: Deadly Hands of Kung Fu #1 - Part One: Deadlier Than The Male by raineffect on September 05, 2011

Wow. Let me begin by telling you how impressed I am by this issue. I don't read Spiderman. Before I read this, I couldn't care less about the Spider-Island arc. I saw the score that was given by Matt and I decided to pick it up at my weekly comic store run. Let me tell you; I now care about the Spider-Island arc. All thanks to this issue. You know the drill; I don’t talk about the plot. Let’s start with the most striking thing from the first page of this book: the artwork. Who is Sebastian Fium...

I Fought the Law and the Law Won 0

What is the law, you may ask? Don't judge a book by its cover. Sadly, I fought the age old law and I was promptly defeated. This is a horrible, horrible piece of writing that only has one particular saving grace; and that is the artwork. Without the artwork, and the absolutely amazing cover art, I would be struggling to even give this issue half a star. Allow me to justify my harsh attitude.  I knew only a very, very small bit about Moon Knight coming into this issue. I saw the cover in my stor...

Sadly, Natasha has been given quite the shove in recent memory. She has made mostly minor appearances in other comic books, and the only reason she has been given more attention recently is due to her portrayal in Iron Man 2. I am a loyal fan of the Black Widow and I was satisfied with her character in Iron Man 2, as it carried most of the prominent characteristics that Black Widow fans should expect. Regardless, this dedicated series was a long time coming, and I believe Majorie Liu has serious...

Holding Onto The Past 2

We've seen James Barnes go through some extraordinary changes over the years. From the swashbuckling sidekick of Steve Rogers, the cold and calculating assassin known as the Winter Soldier, the burdened lone warrior trying to right his transgressions to finally a man trying to honour memory of a legendary hero and best friend as Captain America.   This is, in my opinion, the most personal story that Ed Brubaker has written for the burdened hero.  It is also the finest piece of comic book writing...