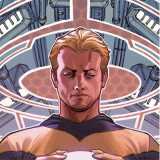 Guardians of the Galaxy is amazing!

Since her return to the Marvel Universe, after her lengthy disappearance following House of M, Wanda has posed something of a problem for the Avengers and the X-Men. Despite losing her connection to the Lifeforce and being unable to repower mutants who lost their powers on M-Day, Wanda has demonstrated that she can once again cause M-Day to happen, which is what she says to Red Skull in Uncanny Avengers #2. This poses the question of whether Wanda should be allowed to keep her powers or if she should have safeguards to prevent her from re-creating M-Day. The way I see it, there are two option for dealing with Wanda. Option A is permenant and would therefore be the safest course of action, but would involve the removal of Wanda's powers. Option B is not quite as safe, but would allow Wanda to keep her powers and use them to atone for her actions.

The first choice (A) would be to have either Rogue remove Wanda's powers, as she threatened to do to Hellion in X-Men Legacy #243, or else have her take Dr. Rao's cure. In either case, Wanda loses her powers permanently as well as her ability to effect another mutant genocide since, at there core, her powers stem from her X-gene. This is the safer course of action because, without her powers, Wanda becomes a normal human. This doesn't mean that she cannot still be a hero it would simply mean that she would have to adjust how she goes about being a hero.

The second choice (B) would be to have telepaths and spellcasters place checks and mental blocks that would keep Wanda from being able to effect universe-wide spells. While this option is worse from a safety standpoint, because it only takes time and effort to get around these safeguards, it is also the more ethically sound option because it allows Wanda to keep the powers she has had all her life. The slippery-slope dilemma also comes into play because her son, Wiccan, has shown that he has a similar powerset which could potentially affect the same outcome.

Personally, I'd choose Option A because, at the end of the day, one person's happiness should not be more important than the happiness of hundreds of thousands of others. Besides, depowering Wanda doesn't mean she has to give up being a hero, it just means she has to change how she goes about it. Saving the world is like fighting a war, you can be just as effective on the front lines as you are behind the scene. Given her time spent as a villain, she could go work for S.H.I.E.L.D. or S.W.O.R.D. and help them to anticipate how a villain would act. She could volunteer at the Future Foundation or Jean Grey School to teach the next generation of kids about the amazing things she's seen. If she really had her heart set on staying on the front lines, she could have Iron Man build her a combat suit like he did with War Machine. There are plenty of options for her to choose from that allow her to atone for her crimes without risking causing another mutant genocide.

So what do you all think? Should Wanda be allowed to keep her powers, even if she could cause another M-Day-level event, or should she be forced to give up her powers because the risk of abuse is too high?

How do Ariel's powers work?

In Second Coming, the alien/mutant Ariel was killed by a missle strike on the car she was traveling in with Wolverine and X-23.

However, Ariel is a teleporter capable of linking two doorways.

So my question is this: What exactly are the limits on her teleporting? Can she link any two doors or do they have to be the standard rectangular-shaped door. I never read Fallen Angels, and was only introduced to Ariel when she made an appearance during the Utopia event, so I have no idea how her powers work.

Which member of X-Factor will die?

So who will it be that kicks the bucket and will they even stay dead with Layla's power?

I think that the woman of X-Factor are safe from being killed, because there are 4 of them to the 5 guys on the team and with Havok and Polaris joining the team after Regenesis killing one of the men will allow the team to become gender balanced with 5 of either gender. Of the men, Madrox is safe, because he appears in X-Factor #229 as a witness to his and Layla's death (http://dewaynes-world.popshop.comixology.com/item/OCT110682/X-Factor-229-Xregg). Strong Guy is also safe because he was already killed on a recent case and later brought back by Layla. That leaves Rictor, Shatterstar, and Longshot. Ric won't be killed because he just got his powers back in Children's Crusade and that would make his getting his powers back redundant. So my prediction for who will die is that it's going to be either Shatterstar or Longshot, with odds favouring Longshot because his powers are being blocked somewhat by Bloodbath.

Another possiblility is that Pip 'ports in just in time to get killed, but I don't think that this is very likely.

However, I also believe that Layla will be forced to use her powers to bring the team mate back, which fits with all 11 characters on the cover of X-Factor #230 (http://i.newsarama.com/images/XMenRegenesis-gold-final-massive.jpg).