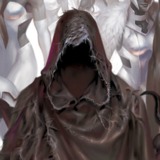 @spawnoftoilet: To start with, obviously what is meant by “comics” doesn’t include mange etc. Those might technically be similar/same things but what is dying is the nerd interest in consuming comic universes and debating them. Saying “manga are comics” as a counter doesn’t work because I don’t care about anything manga related. Don’t much care for the sales stats either, I never see legit comic book threads here anymore with scans and discussions.

Secondly, it seems like you and many others here are unclear on the definition of a comic book. A comic book movie (cbm) is most definitely NOT a comic book. The success of (or popularity on the Vine of) DCEU/MCU/the Boys etc are irrelevant OR even detrimental to the relevance/success of comic books.

Sure, movies might boost sales to some degree but they also cause the oversimplification of comics and the marketing gimmicks that we all seem to hate. Success of movies means that for so many people, movies have overshadowed actual written books as the main mode of storytelling for the characters we like.

Of course Marvel and DC are thriving, but this doesn’t change the fact that comics are dying.

If comics aren’t dying then how come no one on the Vine discusses issues or comic battles anymore? Think on that!

Just when DC was getting its shit together... Re-telling of origin, meaning Bendis will ignore all canon and previous stories.

Hype imo, where are the people on the vine who constantly cry about young Jean and rant about how old Jean must return?

Looks great, I think this movie might beat Avatar and Star Wars in box office.

Weird threat, seeing as there are many figures in MU who would come and get them out of the rubble. Jean Grey is one of the most powerful telepaths in world. The stakes might as well be 0.

So Camuncoli can produce good art!

I actually like this event... Hope Slott manages to land the ending but I doubt.

Damn, has anyone read this issue?

I hope she gets a power-up.