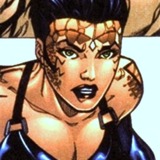 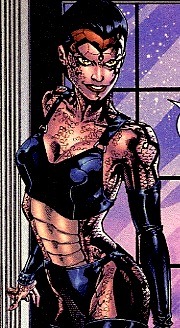 ALEX X Beta was created from human mutant DNA spliced with reptilian DNA. Using her hypnotic abilities, Beta escaped the YOUgenics facility that created her as a child. She lived on the streets as a thief and became a hired assassin because of her poisonous skin. She was found and adopted by a woman named Charlotte Machiavelli who led an group of female operatives known as the Devil's Mark Sisterhood (called so for leaving a red lip print on their kills). Taking the name Evelyn Queen, she went to school and became a fashion designer by day for her own line called Queen of Diamonds. She continued her work as an assassin under the moniker Queen Cobra. When Machiavelli died, the DMS was transferred to her authority.

Since then, the assassin group has been disbanded, and Queen Cobra has started running a prostitution ring. She has teamed up with drug distributer Mistress Sangria to dominate the Gothic City underworld.