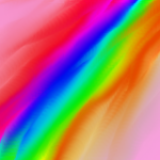 Have you ever seen a female that freaks out when ever she sees Iron Man movie or makes Cosplay costumes for fun? Well you have now. Puffy Pink- AKA Nicole- is considered a spaz, very annoying, a nerd, a geek, and totally ruthless. She's pretty much hated by everyone in her school and doesn't have a life. Basically all see does is eat, sleep, dream, draw, attempts to do well in school, play on the computer and read comics. All that changed when she found out out she has super powers.