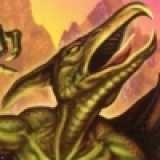 Buffalo wings, do your thing.

Not sure how many of you go to http://thatguywiththeglasses.com

Anyway, they have a new guy, Linkara.  He does funny comic book reviews.  He's pretty awesome.  new at the game, but getting into the swing of things.

and now that he's been accepted as more than a 'random contributor' he's got an intro video detailing what he's gonna be doing in the future.

he's pretty new at it, but he's getting into the swing of things, I expect him to get better and better.  He doesnt really give off the vibe of a knowledgable comic book guy, but he's here to entertain, more than preach opinion.

Anyway, for the bored, his video's are a decent way to spend 10 minutes of your time anyway.  And the entire site is even better!

You have to watch this!

Even if you love batman.. you have to admit, this is hilarious :D

Indiana Jones and the Kingdom of the Crystal Skull

I just got home from watching it.

I have to say I have mixed feelings about the film. it started too slowly, though it had its moments and the ending just didn't feel right.. it definitely lost its Indy Jones appeal at the end.

However the middle of the movie was simply excellent.

All in all I give it a 3/5 Its worth a watch but unlike the rest of the series, its not special.

The effects however were pretty good.

All in all I think it would have been a bit better had they cut some scenes out and hiked up the action towards the end.

Its worth a watch when it comes out on DVD, in my opinion.

Ive been hearing a lot of folk rave about death note for years now.. I finally decided to give it a chance.

Its pure awesome.. its not a flashy anime. No great combats or powers or whatever.. no characters that are really overdone. No stupid hair..

What it is so far is an absolutely awesome story of intelligence and wit. The story is amazing.. the characters are realistic and it really draws you in and leaves you wanting for more. Its one of the greatest stories I have ever experienced.

I greatly recommend it. if you, like I did, put off watching it (or reading it) then I really cant recommend you go and experience it at the first opportunity any more.

Though, for those interested in an even greater story, I cant recommend 'The Way' any more. Its a free download RPG maker game wrote by someone who should be writing it as a novel.