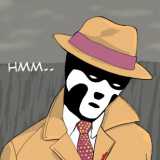 Looking forward to a second viewing.

Much like Batman Begins, I really didn't like what I saw from the trailers (I almost skipped Begins to wait for dvd).

Yet once again they managed to fit everything together into a very nice ensemble. This movie is much stronger than the first, in the same way that Empire kicks butt over Star Wars.

Ledger's performance added the additional credibility needed to pull off a truely grisly Joker, instead of a crazy clown of crime. His performance is inspired by Nicholson's, but Heath takes his Joker to far greater heights. Adding depth and avoiding the campy pitfalls of the previous Joker acts. This Joker isn't just a whimsical madman, he's a clever killer with a point to prove. The writer did a really good job of explaining his motivations...a person who is so disturbed by his inner being, that he seeks to prove his sanity by showing that other people are no different than himself.

I have a few complaints about the film, but most aren't that bad. Mainly Batman's voice sounds ridiculous in some parts (too raspy!). Also...please never show the costume in full light again. The interrogation room scene with Batman and Joker ... the Bat-mask looks big, bulbous, and borderline silly!

Overall very well written movie with great performances by the actors involved. This Batman movie (like the last one) is filled with unexpected surprises, which I have to say is just cool! :)