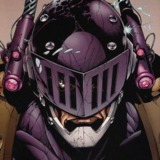 How can you strike a man who rewrites the fabric of reality itself?

Vertigo is relatively obscure, being really a major villain only in small rogues galleries, like Green Arrow, or showcasing himself in Checkmate or Suicide Squad. His character isn't exactly ground-breaking, basically being a royal elitist robbed of his heritage. His powers are far more interesting, being able to destabilise the balance of those he faces, as well as do a lot more included.

Redesigns his ultrasonic device used to correct his ear defect (and use his powers, before it was retconned to it being metahuman in origin) using a pocket calculator while in prison. (World's Finest #270)

Scan 1/2- Catches a fighter jet mid flight with his powers, bringing it down (The Spectre #13)

Scan 1/2- Dodges around multiple Green Arrow projectiles (through he was disorientated, and wasn't 100%) (World's Finest #270)

Dodges Green Arrow's arrow projectile and sends him flying out of a window with a uppercut, knocking him out. (World's Finest #252)

Boots down a steel door (Checkmate #4)

Scan 1- One shots Black Canary with a punch, leaving her dazed enough for him to escape (World's Finest #251)

Scan 2- Does this again, through she's able to catch him with her scream before he can leave again

Uses magnetic boots that allow him to walk on walls and ceilings. These are also presumably what is used to make him fly around. (Who's Who- The Definitive Directory of the DC Universe #5)

Scan 3- Even weeks after, Green Arrow's trauma within his ear prevented him from aiming correctly, missing targets by a good mile. (Green Arrow #24)

Beats Abra Kadabra off panel. Take that for what you will. (All Flash 2007)

Drops a few Parademons with his powers (using his hands....for some reason) (Suicide Squad #34)

Drops Batman with his powers, forcing him to make himself blind and deaf to avoid the effects (Batman #647)

Drops Black Alice with his powers and puts her off balance. (Suicide Squad #67)

Drops Blockbuster II with his powers and pins him to the ground, taking him out (Suicide Squad #66)

Drops female Manhunter and knocks her out (Manhunter #34)

Drops most of the Justice League in a wide usage of his Vertigo effect, only not effecting Cyborg due to his robotic nature. (Justice League #10)

Scan 1/2- Explodes a dude's head with his powers when he actually pushes them above what he usually does (Green Arrow #23.1)

Distracts Iris with a tiny exposure to his powers (52 #34)

His powers also work on technology as well, stopping a jet missile mid flight and making it miss the target (Suicide Squad #47)

His powers disrupt communication tech functioning around it, as well as guidance systems (Green Arrow #24)

Scan 1/2- Traps Green Arrow in a illusion using his powers, warping his perception and making him deeply confused (Green Arrow #2)

Uses his powers to defeat Metamorpho by dis-stabilising his specific elemental form, causing him to dissipate (Checkmate #13)

Scan 1/2- Uses his powers to deliberately smash two helicopters into each other, showing that he can control where his targets go when under his Vertigo effects. (Suicide Squad #57)

It's explained that Vertigo's powers have been practised to the point that he could warp the minds of a whole city to his liking. This was originally thought to be some sort of reality warping, when in fact all Vertigo is doing is convincing those under his spell that things are happening...when they actually aren't. He basically got the power to create Interception effects. (Green Arrow #49)

Scan 1/2- Fools a entire prison force that the prison itself and the objects within it have merged with their bodies, incapacitating them (Green Arrow #48)

Scan 1/2/3- Flips around the gravity of a whole city under his new illusion powers, convincing Green Arrow and Black Canary that they are being flipped around. (Green Arrow #48)

Scan 1/2/3- Controls hundreds of people using his powers to generate a mind altering noise, apart from Black Canary due to her eardrums being naturally far more sturdy than the average person due to exposure to her sonic powers. This is a good look at what his powers look from the outside looking in. (Green Arrow Annual #1)

All in all, Count Vertigo is a very capable mid tier with some impressive hax on his end. He's not the kind of person to fight on the front-line, he's more of a support/background character that can work crowd control and has a massive range for his powers. He's basically a glass cannon in that regard.