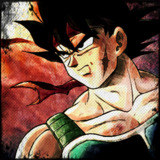 Broly's feat, what is it really?

Disclaimer: Broly is not Canon to the main continuity of Dragon Ball.

The heavily controversial feat of Broly destroying a Galaxy.

He may not have destroyed the galaxy in one blast, but...

We know some things for certain:

1. He destroyed most of it.

It's likely they left a few bits and pieces as a trail for the others to follow:

Considering Paragus' whole plan was to lure Prince Vegeta to his death, and he had Broly purposely leave Ki signatures behind leading to New Planet Vegeta.

2. He did it in a relative amount of time.

It's illogical to think that King Kai waited decades to let Goku know what was happening.

We see the Galaxy spinning, it would be scientifically impossible for a galaxy to be spinning that fast in that amount of time, but then again it isn't really possible for anything to go Faster Than Light according to science. It's not that Science doesn't apply to fiction, it's that science doesn't usually limit fiction.

It's highly unlikely that he actually destroyed the Galaxy in one shot, because he had been attacking places since he was a teenager.

But we do know he destroyed a good portion of it in a relative amount of time to King Kai.

So here's where the numbers come in.

Misc. Properties of the feat:

1. Broly must have MFTL+ Travel Speed and Reaction Speed.

2. It's likely he tanked a few of the stars he sent Supernova.

3. He can survive in space.

"Broly lost to an amped SSJ1, Broly is fodder."

Gohan, Trunks, Piccolo and Vegeta gave Goku all there energy, Goku transferred all that energy into Broly, causing him to overload. This is evident in the fact that Broly starts glowing and cracking the explodes.

He was considerably stronger.

Secondly, the simple answer is it was PIS. Nobody was able to harm Broly yet suddenly they vaporize him? Simple PIS.

No matter how you slice it, you can't call this an outlier since Bojack and Hatchiyak also did similar things, and the film maker said Broly is 2nd to only Janemba in movie antagonists. The feat is massive no matter which way you interpret it.

Janemba is a Multiversal reality warper.

Disclaimer: Janemba is not canon to the main continuity of Dragon Ball.

Here we will be discussing the underrated character from Dragon Ball Z: Fusion Reborn. He is a Multiversal Reality Warper.

Here is the DBVerse, the bottom half is the mortal universe, the top half is Other World (A separate Universe.) Other World actually appears slightly larger.

"In "The Rebirth of Fusion!! Goku and Vegeta", he was sealed inside of Janenba's magical barrier, causing the laws of both this world and the afterlife to go haywire. (Daizenshuu 6, p.142)"

He warped the entire Other World Universe and made the powers of the Gods who resided there useless.

He also warped the mortal universe, he resurrected every dead person. Keep in mind he shows no sign of fatigue or stress from completely warping two universes.

This is two universes he has warped casually.

He was also able to create a mini Goku in his hand that was stronger than the original. He can also warp inanimate objects and turn them into other versions of him:

He can open portals in time and space at will.

He defeated someone who shook the universe as a side effect of powering up also.

He can create alternate dimensions in his hands and totally disassemble his atoms and move around.

Janemba is the living definition of evil.