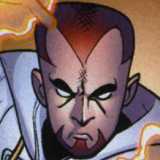 Apparently she will be featured quite prominently in the newest Batman animated series. What do people think of this or what role she might play?

Is the issue that low on plot that the fact that characters get new costumes are part of the synopsis?

@PolarisJunkie: Technically, it was the actual past of the Beast's continuity, until he went back in time. As soon as he did that, another timeline split off, at that point, from his continuity. Whatever changes occur because of his actions will affect that timeline. This was established in an old Marvel-Two-In One story. Reed Richards comes up with a cure for the Thing that would have worked, had it been administered shortly after his transformation, when his cellular structure was still in flux. Using the time platform, the Thing takes the cure back to his earlier self, and forcibly administers it. That Thing reverts permanently back into Ben Grimm, but when the Thing journeys back to his own time, he finds that he himself doesn't benefit from the cure. Richards explains the whole alternate timeline deal to the Thing, and another layer of tragedy is added to the character.

It's very possible that the current writers at Marvel have forgotten the way things work, as established by previous writers, and Bendis actually has some plan to reverse all the "damage" the Beast is causing to his own timeline. The way things are supposed to work, though, the Beast isn't damaging his timeline at all, though he's certainly screwed up an alternate one.

Thats actually pretty awesome, I'm gonna have to track that story down. And yeah, I have a feeling that the current writers have either forgotten or have chosen to forget this tidbit as I remember reading in interviews for this series that Beast indeed travels to 616's past and that it wasn't an alternate reality. I guess we'll see however.

Didn't Magik call something a fixer upper as well? I am quite perplexed as to what people are liking here. There are so many plot problems (Beast having a time machine, if he goes back in time and meets his former self then he should now remember exactly what occurs to him since it already happened) and characterization issues. I grimaced when I saw Bendis was being announced for the X-Men. Why can't he write a Luke Cage book in his own little corner of the M.U. and leave everything else alone?

He really doesn't care about good characterization, plot pacing or internal consistency. Bendis constantly annoys me because he mainly cares about telling his story regardless of the characters involved. For someone like me with a pretty thorough knowledge of certain characters, it's a big turn off, and makes me think that I don't need to read any of the stories since they will be retconned or forgotten anyway.

I completely agree. It undermines every story because nothing has stakes or consequences, anything can be ignored or swept under the rug. Why should we care if the writers don't?

@PolarisJunkie: Actually, it doesn't work that way. At least, not the time machine the Beast used. The Beast mentioned using the time platform designed by Doom, tweaked by Richards, then further modified by McCoy himself. That being the case, the moment the Beast went to the past he created an alternate universe, one in which those five X-Men disappeared. It's conceivable to have any one of the original members die, or stay behind, without changing the Beast's timeline. It's because he used that time machine that I'm quite curious what the ultimate outcome of that act will be.

I thought that they were pretty adamant in saying in that it wasn't an alternate past but the actual 616's past since that was mostly what people were objecting to. I could be wrong though..

Didn't Magik call something a fixer upper as well? I am quite perplexed as to what people are liking here. There are so many plot problems (Beast having a time machine, if he goes back in time and meets his former self then he should now remember exactly what occurs to him since it already happened) and characterization issues. I grimaced when I saw Bendis was being announced for the X-Men. Why can't he write a Luke Cage book in his own little corner of the M.U. and leave everything else alone?

I've read both forms of Legacy from when Rogue starred and now with Legion. I wasn't really a fan of Rogue's run at all mainly because it never stopped spotlighting her. I've never been a huge Rogue fan either so that didn't help. Legion is def. interesting but its not really clicking yet. I'm giving it a few more issues to see.

However, my problem with Legacy is this. When a book is called X-MEN, I expect a team. Don't really care what the team is but there should be a team. In Rogue's run, it was all about Rogue and her Un-Seen Friends that occasionally raise their hand to speak. Now its a book solely about Legion. I understand its safer marketing wise to call a book X-Men then call it ROGUE or LEGION or something, but its annoying to me to no end and its false advertising.

I didn't really get the sense that they were done, honestly. They still obviously care about each other immensely, they just need and want to be in different places at this point in their lives. It was a weird "break-up" more of a let's just cool off for a bit. Heck, Havok said he wanted Lorna with him when he was initially leaving.

As much as I love both of them, it's going to be interesting to see them work without each other for a bit. I'm sure they'll be together again at some point though. They always seem to reconcile.

Polaris was rendered powerless after Zaladane stole her powers. Then she started manifesting those weird emotion based ones.

how long was Polaris powerless? a few days?

oh i also rememebr that Ms marvel also lost her powers because of Rogue.

So we got 3 characters now who became powerless at some point.

I'm not sure, not for long though as she joined the Muir Island X-Men and started gaining those emotion based powers based on the people around her. When Zaladane was killed though, Polaris' powers returned and that's around when she joined X-Factor.

Polaris was rendered powerless after Zaladane stole her powers. Then she started manifesting those weird emotion based ones.