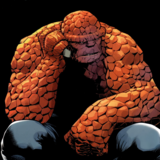 Farewell fictional battle debates, it was truly fun while it lasted 👋

Well I wasn't planning on making one for Trion Juggernaut but apparently it's needed, since we still have people saying that it was "Cyttorak amping Cain" which is complete nonsense. I'm not going to waste any time so this should be a short post.

Basically, a second gem of Cyttorak appeared in Korea and of course Cain was drawn towards it, but it was a trap, and instead the Gem was powerless and used to siphon Cain's power out of him.

However, this second gem was imbued with the spirit of the unnamed enemy of the Trion, who are a trio (obviously) of gods ruling over their own dimension. This spirit then possessed Cain's body and gained an enormous level of power.

It was essentially using Cain's body to channel Cyttorak's powers in order to destroy the Trion, and for some unexplained reason it was able to use all of Cyttorak's power, rather than just the "normal level" of power one would received from the Gem.

Xavier theorised that this was simply due to the spirit having "the ambition, vision, and imagination to realise the full potential" of Cyttorak's powers, but this is never expanded upon and we never find out exactly why the spirit was able to achieve this level of power. It may simply be due to it being a massively powerful mystic being, or it may specifically be able to siphon mystical power, who knows.

Anyway, we saw this spirit inside of Cain's mind,

Before Cain (with a little pep talk from Xavier and Logan) beat the shit out of him and took control back over his body, and as soon as he did he immediately went back to his normal power levels and the rest of Cyttorak's energy caused a black hole which was going to swallow the dimension.

And that's basically it. The Trion don't have anything to do with Cyttorak, the spirit was just using Cain as a channel for Cyttorak's massive power which he was going to use to destroy the Trion. It certainly has nothing to do with "Cyttorak amping Juggernaut" or whatever nonsense people like to spout. Cyttorak being able to adjust Cain's power at whim, or specifically increase his power, didn't come around until 2012 anyway (over 10 years after the Trion storyline) where it was mentioned in Fear Itself that he could depower and repower Cain as he wished. (With that said he did lose his powers around 2002 due to an unexplained fight with Cyttorak).

And even then the first time we actually saw Cyttorak specifically give Juggernaut an amp was in The Once and Future Juggernaut in 2015.

And I doubt anyone actually cares about the story, but the unnamed spirit turned out to be the dark side of the Trion which became sentient, spooky stuff I know.

And just for the record, here are the 3 relevant handbook entries

This idea that Cyttorak just randomly decided to amp Cain to the point where he can punch through dimensions is just straight up objectively wrong, and anybody who has read the story arc knows that. I don't know why there is so much misinformation about Juggernaut on CV, but people just regurgitate what they hear without stopping for a moment to at all check the validity of the claims.

Anyway, thanks for reading.