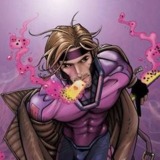 Hated the costume designs and hated the animation, but there were some good character moments.

Send them back please. Honestly, every storyline they've been in has made me less of a Marvel fan. And I like the original lineup generally. It's not just Bendis - it's just a bad, boring idea IMHO. It just leads to a bunch of comparisons between the originals and these time displaced replacements.

Need to see the international ticket sales - "X-Men Apocalypse" ended up bringing in $534.5 million worldwide so leaving out huge markets like China is a big problem with these projections. I would also want to see sales from DVD, digital downloads, and digital rentals.

@ursaber: Sure, send me whatever you have. I may not be able to read it for a few weeks since I am in the midst of law school examinations. I'm not a professional writer, btw, but I have edited my university's literary magazine, written creatively, and do a large amount of professional writing so I know a bit about what drives a good story. As a writer's exercise, have you considered bringing Ororo, Jean, and Betsy together to figure out where the X-Men went "wrong" just to see what conversations you can coax out of them? A lot of untapped potential in those three's interactions IMO since they are all unquestionably X-Men but two of them are icons and the other is a strong character in her own right.

You're already more qualified than me. What I have is minimal but its a solid start,

As for the excersise, no I haven't done that. My main X-Men lure is Jean Grey because of her physical beauty (Love redheads), her characterization and her powers (telekinesis is best power ever).

In any case you will receive a PM shortly after I post this.

I write law-related articles but have not engaged in creative writing in quite a few years. In general, the term "professional writer" is usually applied to people who write creatively and you see other labels for people who write articles as part of their professional career - a person who writes articles for the NY Times would be called a "journalist" or "contributor" or an attorney or doctor who engages in scholarly writing is usually just called by their professional title, for example, whereas an author who makes their living exclusively writing would be called a "professional writer" (which could cover fiction or non-fiction, but you just usually see fiction writers claim that term). I doubt anyone besides a practitioner would want to read my stuff let alone pay for it hahahahaha *starts weeping in the corner*.

@ursaber: Sure, send me whatever you have. I may not be able to read it for a few weeks since I am in the midst of law school examinations. I'm not a professional writer, btw, but I have edited my university's literary magazine, written creatively, and do a large amount of professional writing so I know a bit about what drives a good story. As a writer's exercise, have you considered bringing Ororo, Jean, and Betsy together to figure out where the X-Men went "wrong" just to see what conversations you can coax out of them? A lot of untapped potential in those three's interactions IMO since they are all unquestionably X-Men but two of them are icons and the other is a strong character in her own right.

I agree with this, even though I hate how Banshee was written out of the lineup haha. "Iconic" is hard to define, though - I grew up with the '90s/Jim Lee X-Men but the stories/lineup I remember from childhood featured the lineup below. To this day, almost every quintessential element of an X-Men team is basically in this lineup (sans Colossus, I guess) whereas there were a lot of throwaway members of the '90s lineup that do not necessarily jump to the forefront of my thoughts as necessary X-Men.

I did not really mind the relationship - it was the execution that was ridiculous. If they simply met and started a relationship, that would be fine, but the whole childhood love thing and then springing the wedding on us before even establishing a team up, let alone a relationship, the writers unintentionally soured a lot of fans opinion of this pairing.

@ursaber: You left me speechless.

Awesome. This mean you're excited for this. I sure as hell am. Original Jean is coming back Hooray!

Although, I am angered at the prospect that Original Jean's legacy, is herself but younger. That is asinine, counterprogressive and downright pointless. Rachel or Hope should've been her legacies, not herself before she hit puberty.

Yes, the bold is exactly the problem with the O5 especially Jean. There really is no benefit to getting a "do over" in these series - the problem is that dramatically, these characters have experiences that built on years of stories and development. Bringing a younger version essentially creates a new character which does not really have the established history of the former character but has an established name and codename. As you pointed out, Rachel IMHO is the natural progression for both Scott and Jean's legacies - in fact, you could have Scott and Jean die, have Rachel be the sole Grey left, and actually have the X-Men franchise, all characters involved, and the X-Men in general actually progress instead of regress with prior versions. This was why the '80s run of X-Men was so successful - Rachel really stand on her own as a character who remained relevant IMO even when Jean was brought back for X-Factor while pushing both characters forward. Pushing Rachel to the side, writing out Cable, and then bringing teen Jean back just does not accomplish the same goal...perhaps because this places Jean at a lower level than Rachel in terms of maturity? Not sure. It just does not work to make the X-Men move forward. Similar problem to the time when Nanny made Ororo into a child - you get a new character based on the old one but all of the things that made the old one so great are wiped away and you essentially just get a boring re-tread.

It just feels empty and like the writers are spinning their wheels.

To me, it will always be Jean and Scott.

But, I want to hear your opinion/insight about something. Jean x Scott. Could you remind me why they worked, their dynamic and why they're the ones for each other. My mind is too clustered right now.

I think it really comes down to Jean just being the more fully realized and mature partner in that relationship and allowing Scott to communicate. He is a very introspective and withdrawn character and she was able to sense his emotions and thoughts to see that despite being quiet and reserved on the outside, he was a very responsible person who really felt deep concern for his teammates and the people who fell under his care. What he brought to the relationship was just that - he constantly looks for what other people really need and either provides training or understands who they are - she, as a character, is extremely individualistic and I think she was surprised to find that while every other teammate was concentrating on themselves, his main concern was his responsibility to the group.

Scott has one of the most intense levels of depth of characterization of any of the X-Men (the majority of which tend to be somewhat simplistic and straightforward) so putting Scott and Jean together usually results in storylines where they understand each other but are still surprised by each other. We even saw this in X-Factor - it was arguably Jean that snapped Scott out of his Madelyn Pryor relationship (for better or for worse, TBQH) but the most important thing is that SHE is the person that got X-Factor together, but HE was the person who ended up leading it.

They just make a very dynamic combo capable of sustaining storylines and miniseries in a way that other pairings just don't. I'm saying this as a fan and a writer: they are very much like a King and Queen from classical times sitting near each other and united for a common purpose but definitely possessed of their own powers and personalities. Not to harp on this, but LoganxJean has the Lancelot/Guinevere problem - they could run off together, and destroy a kingdom in the process, but their story really does not get more interesting or go much further beyond that.

I enjoyed it for the most part, but by far the funniest scene was Deadpool with a time machine bringing Logan back LOL

Also, I also do not like Logan x Jean, but I understand there is a level of chemistry, just not enough for a committed relationship of marriage. Its just that, Wolverine's kids tend to die a LOT and by his own hand. I worry about Jean's already troublesome cosmic firebird engulfed life without adding all of Wolverine's baggage as well.

I never saw any chemistry between them, actually. I know that writers sometimes focus on it using a simplistic "She senses emotions/hears thoughts/is passionate and he is a passion-filled/ego-driven hunk" but that is such a shallow level of chemistry (which she shut down in a pretty good character building moment for her years ago in Classic X-Men) that is really never does much to fuel anything beyond a few panels. I chalk this up to comic book writers generally not wanting to deal with actual relationship and communication. That, to me, is the essential element missing from JeanxLogan - see, with JeanxScott, I "get" it...she hears his thoughts while he is very introspective and self-possessed...as a result she understands him in ways others don't. With JeanxLogan, there really isn't anything there besides maybe (?) physical attraction...there really isn't much in his character anymore for her to draw out and the best Wolvie, IMHO, was when he was less of a superstar and more of a beer-chugging Canuck. That is basically what Jean had called out years ago - basically, "you like me, but get over it." Even in AOA, where Jean and Logan were together, the whole pairing basically devolved into their relationship being different from the main timeline. That pairing is like SueStormxNamor - the only purpose it serves is to shock people who are used to the regular relationship.