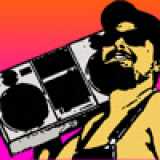 Blue Corn Comics is a California based comic book publisher for educational Native-American comic books. But they're on the verge of starting some super hero titles and there is a contest to design heroes based on the ideas they have posted on their website. One entry was for a water based character named Loon who draws powers from his tomem; the loon duck. I thought it was a very striking concept, and am intrigued by Blue Corn itself.

I really couldn't decide about these when they came out. But the other day I came across a pic of them in their packaging and that did it for me! Anybody remember ToyBiz yo?

This Year I was asked by Snowpark to do a series of decks for their resort signage. I did boards for their restaurant, pro shop café and all the signs in the actual park and around the resort. The whole series is about exploring the charged colors and pop culture imagery from the nineties; bright patterns, dinosaurs and cartoons.